To address this issue, Apple uses an intermediary application called Rosetta that converts (on-the-fly) older Intel programs so that they can run on the new M1 processors.

Newer programs are often available as “Universal” applications meaning that they contain both Intel and ARM versions of the underlying code. This enables them to run natively (i.e, as fast as possible) on both architectures with the correct version selected automatically.

Gig Performer 4 is available as a Universal application and so can run on both Intel and ARM based Apple computers.

However, if you run Gig Performer 4 on an ARM based computer but your VST/VST3 plugins are still Intel only, Gig Performer 4 (or indeed any audio plugin host running natively) will not be able to access those plugins.

How to solve this problem

.
You have two choices:

How to run Gig Performer 4 under Rosetta

.
Close Gig Performer if it is running. 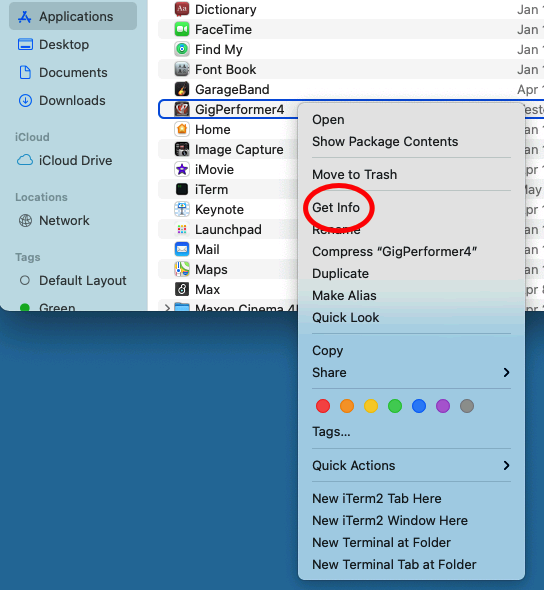 When the Info window appears, click on the checkbox called “Open using Rosetta”

Now, when you start Gig Performer, the Intel version will be loaded instead of the ARM version. You will now be able to access all your Intel plugins.

But how come my Intel AudioUnit plugins still work?

.
What confuses many customers is that Intel based AU plugins are in fact visible when you run Gig Performer in native ARM mode. It turns out that Apple made a special exception for Intel AU plugins. If an ARM based audio plugin host (like Gig Performer) tries to access Intel AU plugins, those plugins are loaded through Rosetta but some extra work is done under the covers to allow those plugins to communicate with the native host. We assume that Apple did this so that their own plugin hosts (Logic Pro and Mainstage) running natively on ARM processors would have access to customers’ existing Intel plugins seamlessly. Sadly, Apple did not see fit to do the same thing for VST/VST3 plugins, hence the problem.