Posted at 16:18h in Gig Performer Blog by Nebojsa Djogo

One of the most often asked questions I hear from guitarists is “why would I use VSTs (plugins) and a computer for my rig?”

They typically argue that computers are

Interestingly, I noticed that most of them don’t actually stop to compare the sound quality nor view that as high-priority – rather strange for guitarists. In my book – sound is the king. I don’t care if I have to run 5 laptops underwater if it will get me a better sound.

Let’s address some of these concerns.

Many people will opt for a “hardware” solution which is not really a hardware solution after all. It consists of an internal computer, an audio interface and some software running inside an enclosure (click here to see examples). No different than a computer and typically less expensive because its quality is not at par with a good quality audio interface and great plugins. These solutions are prone to everything to which any computer setup is prone, and often to a higher degree.

There is also no reason why one could not get a rack mountable computer and mount everything together creating a custom “hardware” solution that’s extremely modular. In fact quite a few of our own users have done just that.

So what are some of the benefits of running a computer-based guitar setup? 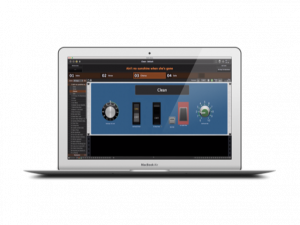 If you haven’t spent time to dial in your sound in a computer based setup – there is not much anyone can do to convince you otherwise, but please – don’t dismiss it before you try because I can almost guarantee you that in a blind test you are much more likely to choose a software based setup due to its sound.

Like everything else – one needs to learn about various options and try various audio plugins that are available, then tweak those so that they match what you want. Simply opening one plugin on a computer, plugging in your guitar and trying a few presets is not going to get you there.

Ten years ago, things were different, but it’s a whole new world now!

Today, with Gig Performer®, inexpensive Intel i5 and i7 computers (or older PCs), great guitar plugins and high quality audio interfaces you can get a setup that 10 or 20 years ago would have either been impossible or would have cost you tens of thousands of dollars.

Keep pushing your rig with the best that today’s technology can offer and you too can Own the Stage® and get noticed!