How to play “Won’t Get Fooled Again” with Gig Performer

Posted at 15:49h in Gig Performer Blog by David Jameson

In this article we explain how to play “Won’t Get Fooled Again” with Gig Performer (yes, there’s a video of the complete process at the end of this article so don’t be afraid to keep reading!).

If you have been watching YouTube videos of people showing you how to play this great song and they’re busy playing 8th note chords something like this:

then stop immediately and read on to see how this song is really supposed to be played.

So to cut a long story short, you basically play it like this: 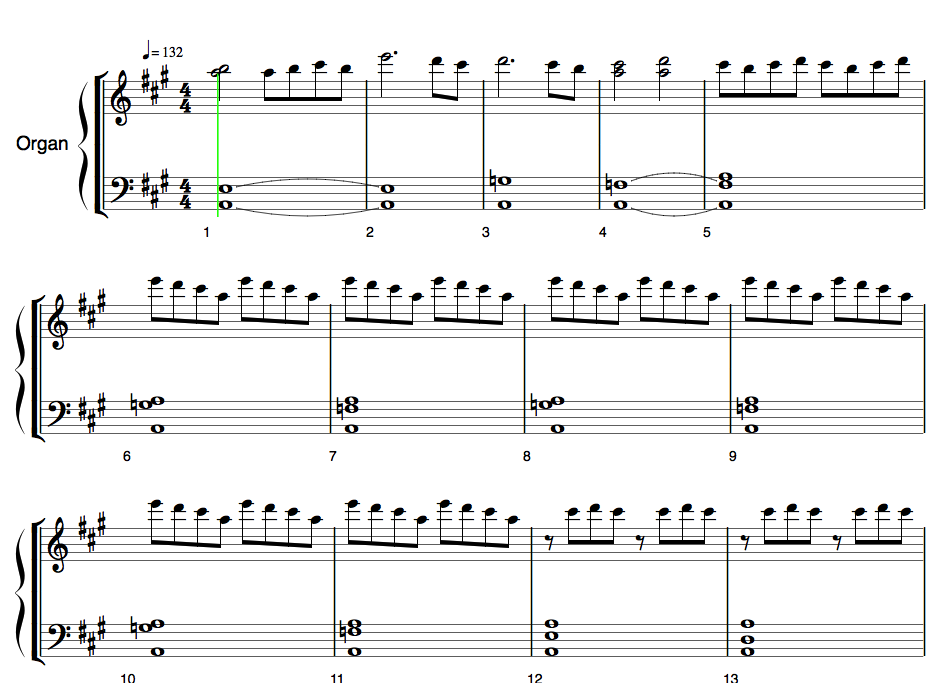 Yeah, that’s right, your left hand is mostly playing whole notes and in fact if the note doesn’t change, you end up holding the note down over many bars, like that very bottom A for example  (my notation skills are not great, all those A notes should be shown tied together).

So what’s going on? In a nutshell, Pete Townsend did it by feeding the audio output of a Lowry organ into a synth and then programmed the synth (originally an EMS VCS3 and later an ARP 2500) to turn the audio on and off very quickly along with sweeping the filter cutoff frequency.

For the demo with Gig Performer, I’m going to use the new Blue3 Hammond plugin along with Arturia’s ARP-2600 plugin.

Below is a picture of the Wiring view in Gig Performer: 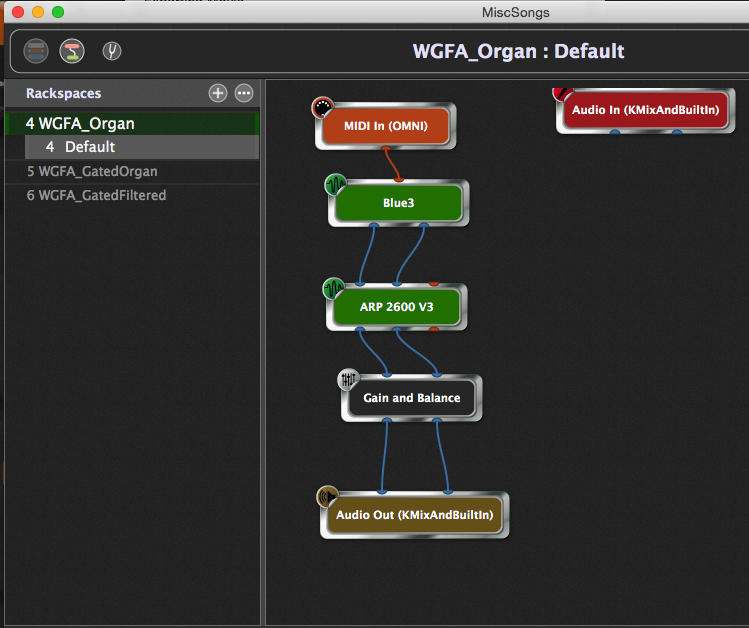 Let’s quickly look at how to configure the ARP. I regret that explanations of basic topics such as VCOs, VCFs, VCAs, gates and ADSRs that form the basic elements of a subtractive synth such as this ARP are beyond the scope of this article. Many tutorials on these topics can easily be found via online search. 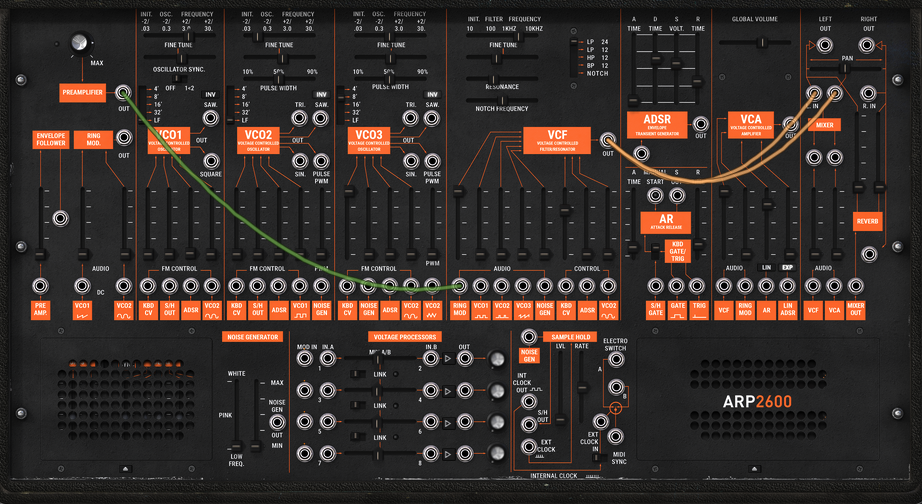 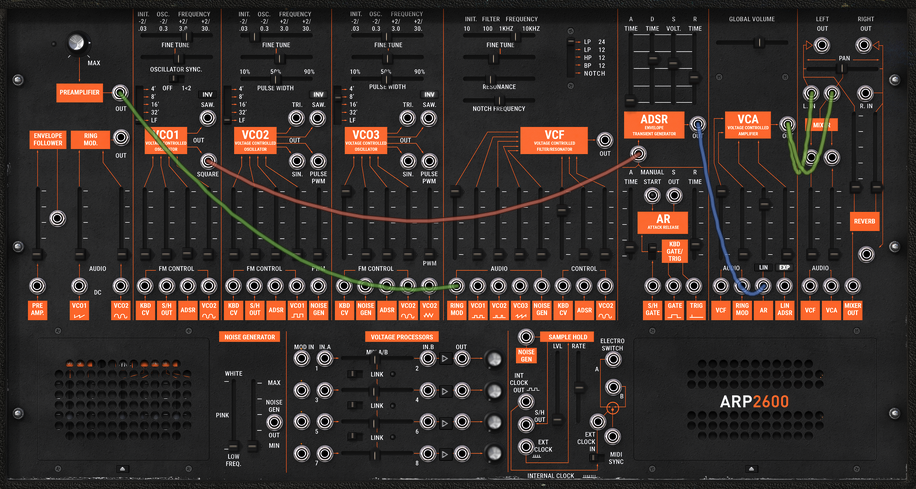 Step 2: Instead of the VCF output going directly to the audio output, we need it to go into the VCA so that we can gate the sound volume on and off repeatedly. If you do not make an explicit connection from the VCF output, the default is that it shows up as the first audio input to the VCA. However, we want to control the VCA with the ADSR rather than with the default AR so we connect the control output of the ADSR into a control input of the VCA (the blue cable). We are also using the square wave output of VCO1, running at a very slow frequency, to trigger the ADSR (the brown cable). The output of the VCA is connected directly to the audio outputs. We could have also just used the default VCA output here. 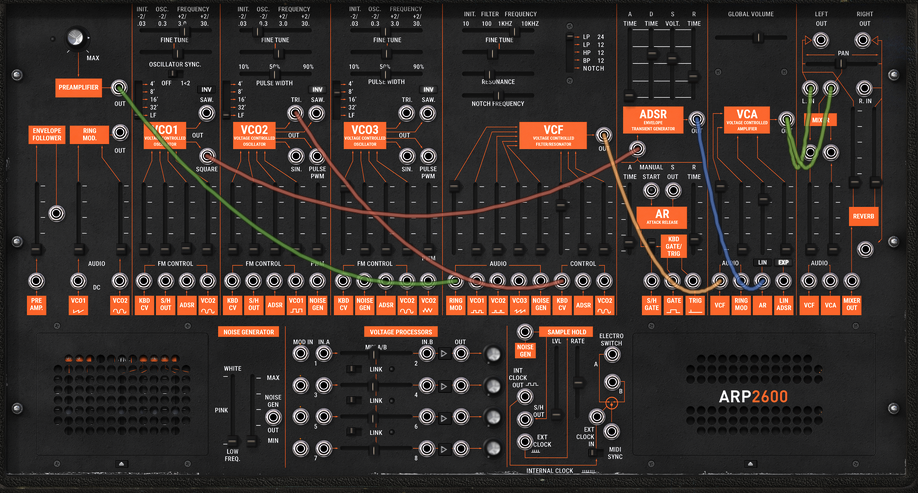 Step 3: Finally, we use a slowly changing triangle waveform produced by VCO2 to control the cutoff frequency of the VCF (the dark brown cable).

Here’s a complete video showing the creation of this effect.

To share your feedback, make sure to visit this Community thread.