My plugin has so many output ports – which ones do I use?

04 Aug My plugin has so many output ports – which ones do I use?

.
If you’re already a Gig Performer user, you know that you can easily route audio and MIDI between AU (Mac only), VST3 and VST plugins by just connecting them visually. However, you may have wondered why some plugin blocks display so many ports.

Although most plugins have just a couple of input ports on the top and output ports at the bottom (orange ports are for MIDI, blue are for audio):

others can have many more ports.

The VST version of Kontakt 5 came in several configurations. You could have 8 audio outputs

Kontakt 6 is out of control – I’m not even going to count them! 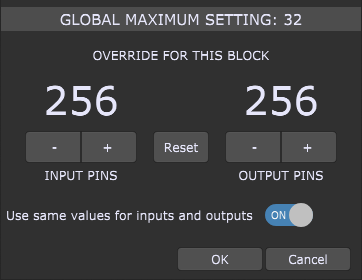 However, what are all these ports for? Do you really need them all?

.
The answer of course is, it depends.

Let’s take a look at some of these ports and see what they’re for. If you’re lucky, the plugin developer will have properly named the port inputs and outputs in which case just moving your mouse over a port will tell you what it does.

As you can see, the first two outputs are a regular stereo pair. The second two, which say, “Direct” are audio ports that do not include the Leslie effect. So if you wanted to use a different Leslie effect plugin, you might use the second pair of output ports rather than the first pair.

Here is the amazing physically modeled piano, Pianoteq from Modartt

This plugin has five outputs. The first two are the expected stereo pair. The last three, called Aux1, Aux2 and Aux3 respectively. Pianoteq lets you virtually position up to five microphones at different locations of the piano (see image below) and you can then mix the audio from each microphone and send to up to 5 output channels which represent those two stereo channels plus the three aux channels. 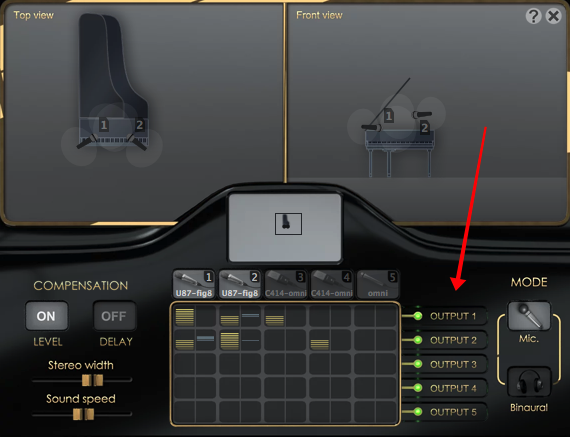 Here’s an instance of Kontakt 5 from Native Instruments

The first two ports are the usual normal stereo pair. However, Kontakt is multi-timbral, meaning it can load multiple “instruments” and if you wish, you can have each instrument come through a different set of ports. Below is an example where I have loaded three instruments, Bassoon, Flute and Bass (go write a song for that collection of instruments!) and as you can see at the bottom, those instruments show up as stereo pairs using the first 6 output ports of the plugin,   1|2 (Bassoon), 3|4 (Flute) and 5|6 (Bass) 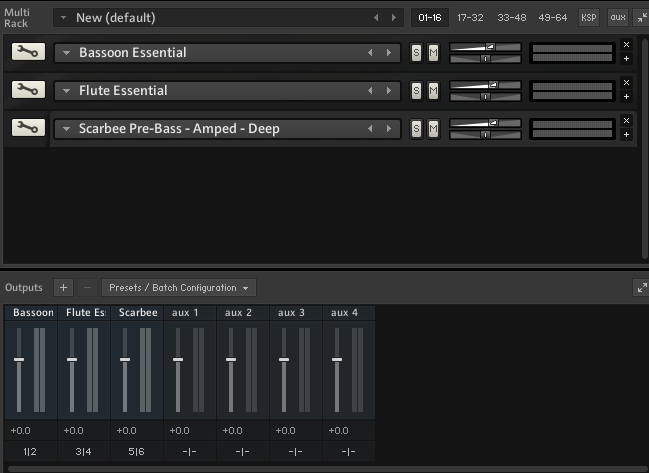