How to leverage other DAWs’ proprietary plugins from Gig Performer

Posted at 21:22h in Gig Performer Blog by David Jameson

Many DAWs come with their own collection of proprietary plugins. As an end user, I generally never use proprietary plugins because doing so locks one into a particular eco-system and also makes it difficult to collaborate with other musicians who have a different DAW.

Nevertheless, with most DAWs, it can be done and generally just requires a little bit of preparation. Conceptually, we are going to view the DAW as if it was a physical external multi-timbral hardware synth. We will send MIDI messages into it from Gig Performer and we will receive the audio generated by the DAW back into Gig Performer.

Incidentally, if you have an audio interface that has some spare I/O channels, you don’t need to use a virtual audio driver. Instead you could just route the output of your DAW into the input of Gig Performer using some patch cables or by creating a submix, if your audio interface has its own firmware mixer.

Note, if, rather than controlling Logic plugins from Gig Performer in a live situation, you are more interested in recording Gig Performer into your DAW, please see this blog article, which essentially describes the same process, only in reverse.

The techniques described below should work with most if not all other DAWs such as Ableton Live, Digital Performer, Cubase, FL Studio or ProTools but you may need to consult the documentation of your particular DAW to see how to select different audio interfaces and so on.

NB: please note that we cannot provide individual support to users on this topic – the information here is solely for guidance to show how it can be done. We encourage you to visit our support forums to ask specific questions.

In the tutorial below, I assume you know how to perform basic Logic Pro X operations so I’m not going to include explanations on how to create channel strips, tracks or insert plugins, etc. 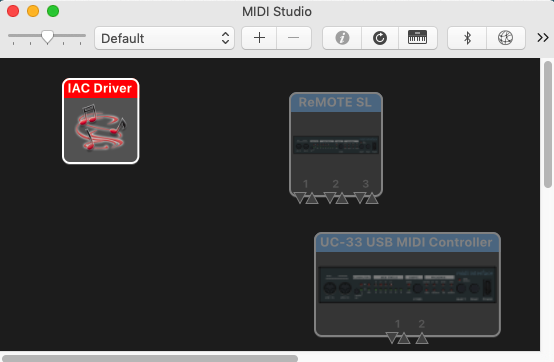 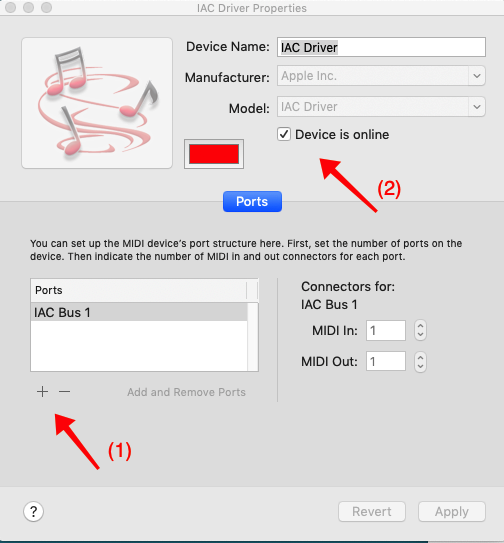 *) Deselect all MIDI input ports except the IAC port. This is a really important step. The reason we do this is because we do not want Logic to receive any inputs directly from your keyboards or other controllers. We only want Logic to receive MIDI events that are sent from Gig Performer. After starting Logic Pro, open the Preferences window, click on MIDI and then on Inputs, then unselect all inputs except the IAC Driver IAC Bus 1 and then close the Preferences window. (NB, if you see more than one IAC driver listed, make sure you select the white one rather than any of the grayed out entries). 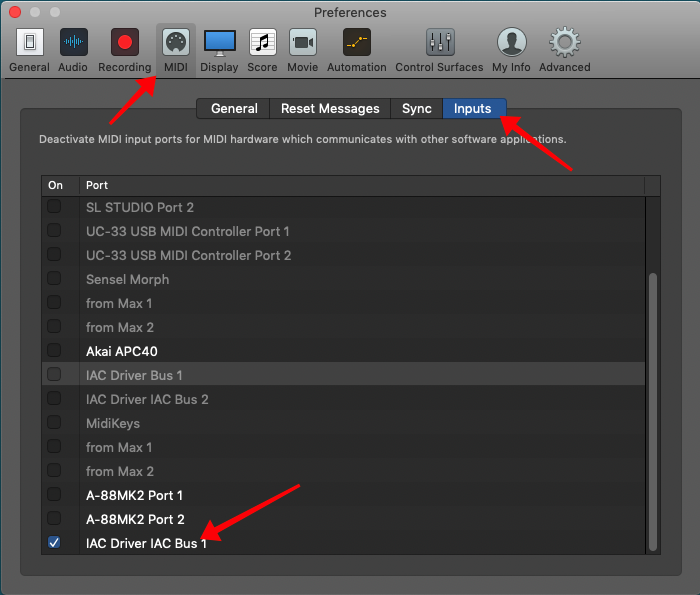 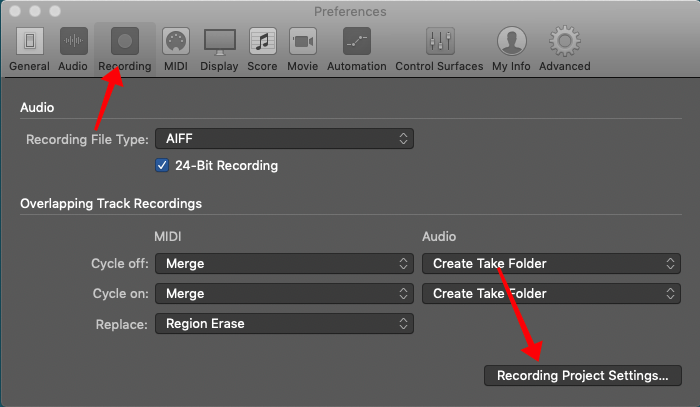 This will open a new dialog where you should check Auto demix by channel if multitrack recording. The purpose of this is to make sure that each MIDI channel targets a separate track in Logic. Otherwise, all instruments in Logic will play at the same time. 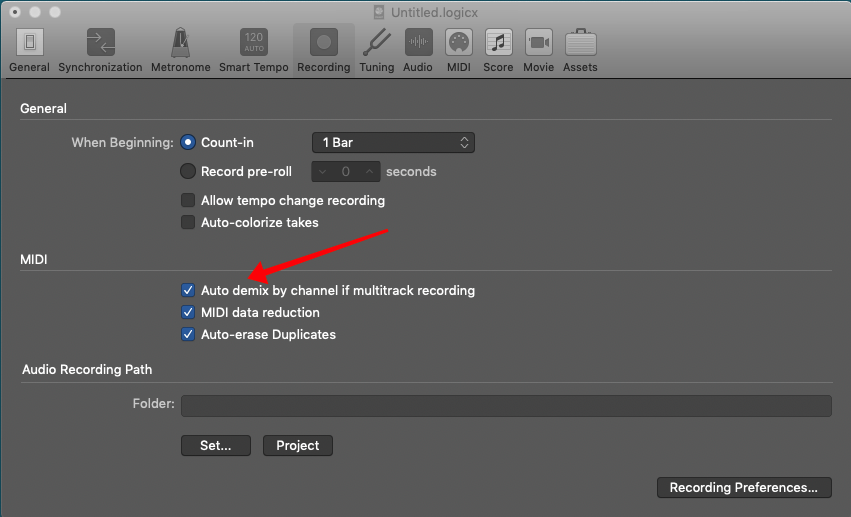 We are going arrange for all channel strips to send their audio out through the Blackhole interface. 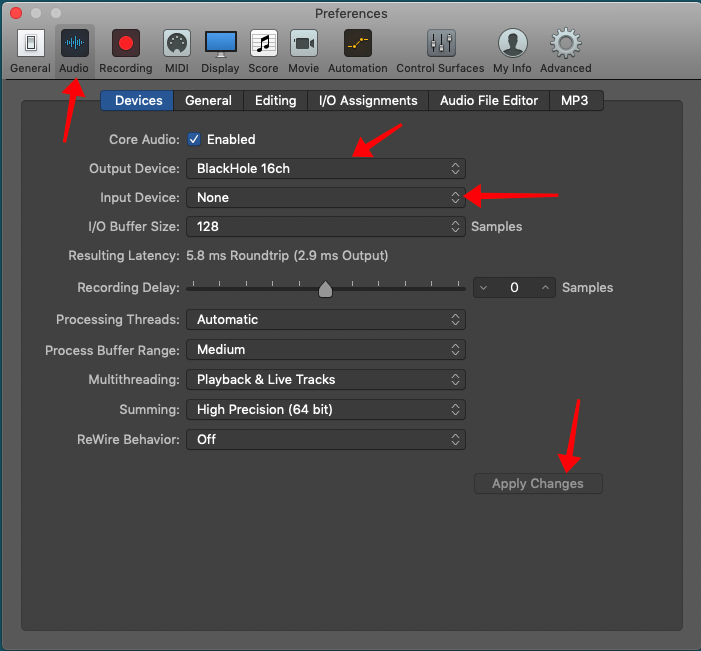 Note: you could have selected the aggregate device that we created earlier. However, if you do that, when you are selecting output ports for audio in Logic for each channel, you will need to make sure you use the correct offset since your physical interface outputs will be first.

Finally, make sure you record-enable both tracks (or alternatively, enable input monitoring).

At this point, Logic is now configured to respond to incoming MIDI events coming from the IAC MIDI port and sending audio into the Blackhole audio interface 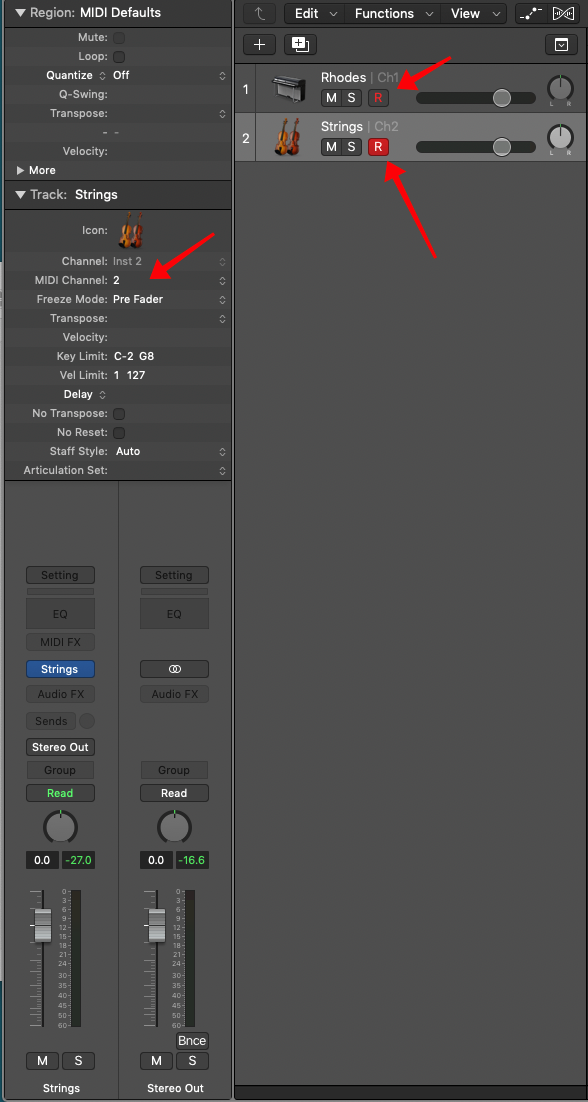 Select your physical audio interface as your output audio device (mine is a Scarlett 18i20 USB) and select the BlackHole 16ch as the input audio device. Click Apply Settings and close the options window.

The audio generated from the soft synths in Logic will be available to Gig Performer though this port.

Setup a basic rackspace with MIDI routing to test everything

When you create a new rackspace, there will be a default Midi In port called MIDI In (OMNI). You cannot use this port. This is because the MIDI In (OMNI) port receives input from all your ports, including the IAC port. So when we send MIDI events out to Logic Pro using an IAC port in Gig Performer (we’ll see how to do this in a minute), we do not want those events to come back into Gig Performer.

So right-click on the MIDI In (Omni) port, select Change MIDI Input Device and then select your keyboard. In the example here, my keyboard is a Roland A-88 using Port 1. 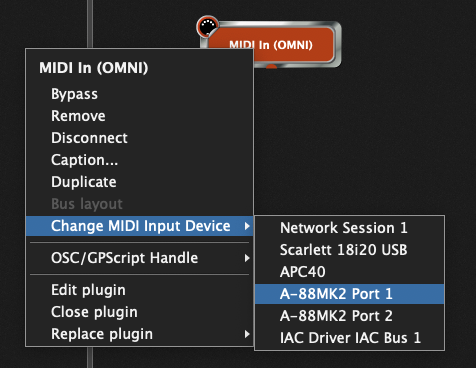 When you’re done, you can right-click on the block again, this time select Caption… and rename the block to something more relevant. I called mine Roland A-88

Create a Midi Out block

Now we want to route incoming MIDI events from the keyboard to the soft synth on Track 1 in Logic. Remember that that track will respond to events arriving on MIDI channel 1.

You will see a list of all available MIDI Out devices, including the IAC Driver. Select that one and click the Insert button 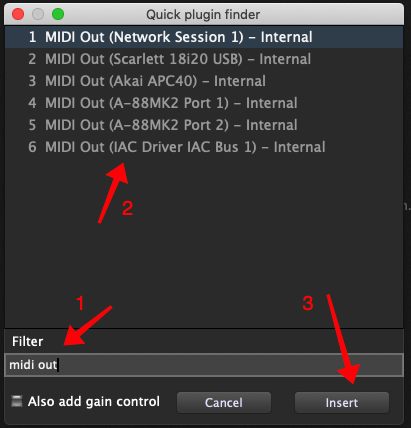 You should now see a new MIDI Out block below the MIDI input block. Any MIDI events sent into that block will travel over the virtual IAC port, directly into Logic. 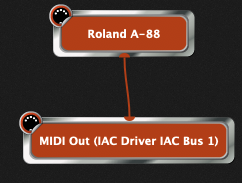 Now, if you play some notes on your keyboard, you should see the meters in Logic flashing as you play. However, you still won’t be able to hear anything.

(Make sure your amplifier volume is low the first time you do this – just in case!) 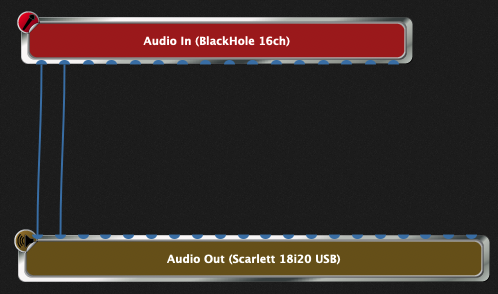 Now, when you play your keyboard, you should see Logic meters flashing and you should be able to hear the audio from Logic.

At this point, you should be hearing whatever software instrument you inserted into the first track in Logic.

So how do you listen to the second track?

Double-click on the MIDI Out block in Gig Performer to open its plugin editor. Change the MIDI Channel to 2 and make sure that Map all incoming MIDI to this channel is checked (by default it should be) 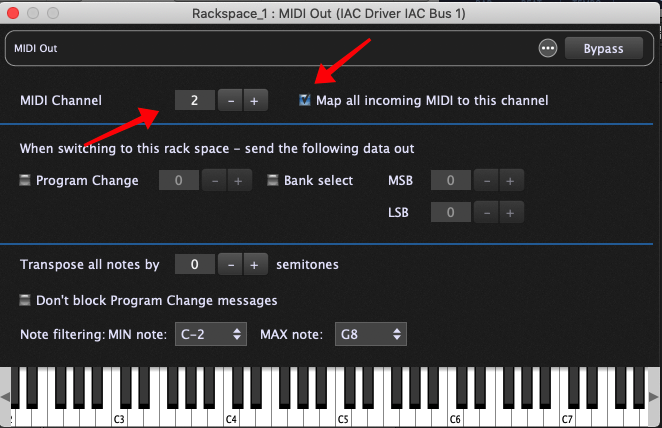 Now play notes again and you should hear whatever plugin you inserted into the second track in Logic.

OK – if you’ve made it this far, you should have a working configuration. You can now leverage all of Gig Performer’s capabilities to suit your needs.

1) Layer both plugins together. Simply duplicate the MIDI Out block and set the MIDI Channel on one of them to 1 and to 2 on the other.

First, just duplicate the Midi In plugin (associated with your keyboard)

Then, double-click on each Midi In block (one at a time) and adjust the keyboard range that you want to use. Optionally adjust the Transpose 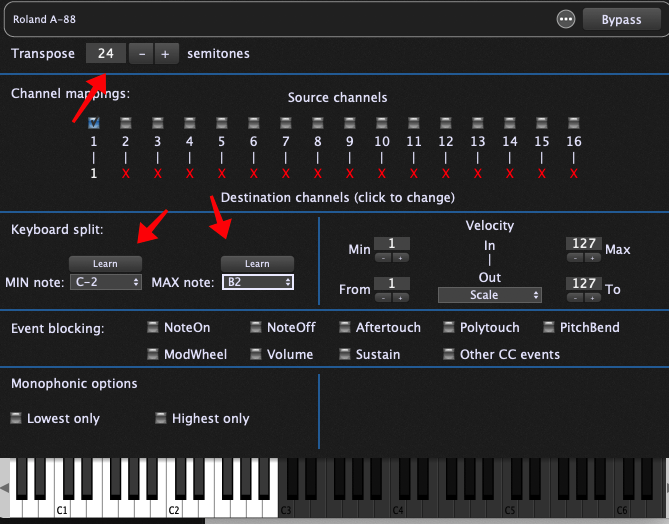 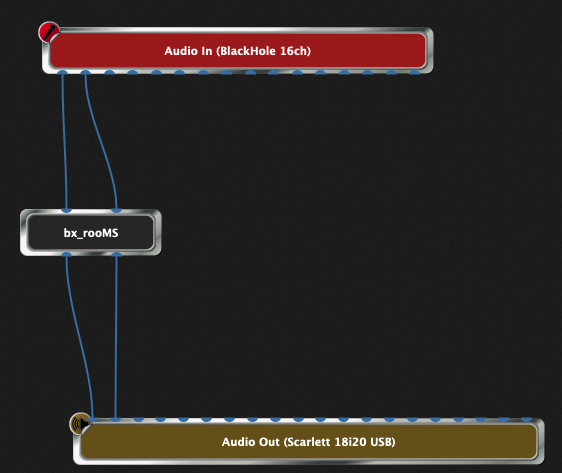 Hopefully, the information above will help you to get started using the plugins in your DAW from Gig Performer in a live situation.