When is it safe to update Gig Performer, plugins or my operating system?

25 Jun When is it safe to update Gig Performer, plugins or my operating system?

Posted at 17:28h in Knowledge Base Articles by David Jameson

It is safe to update Gig Performer, your plugins or your operating system (macOS or Windows) – unless:

.
Here’s the thing — Gig Performer updates are tested thoroughly before they are released so problems with new releases of Gig Performer are very rare. 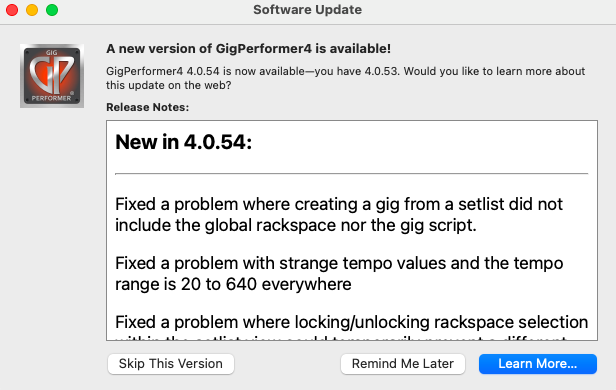 However, it could be that a plugin that used to work properly with an older version of Gig Performer doesn’t work with a newer version of Gig Performer simply because the plugin itself has a bug that only manifested itself with the newer version. In fact we see this sometimes during development and when we do, we contact the developer of the problematic plugin so that the problem can be resolved.

So as long as you have time to test the new Gig Performer update before you have to perform, you’re fine. If you do run into a problem, you can always revert back to the older version in the short term.

But if you’re about to go on tour, dealing with potential issues like this are not how you want to spend your time. Presumably your touring setup, including your existing version of Gig Performer, is working fine so leave everything alone and wait until your show or tour is over.

Personally, this author doesn’t install a new version of Gig Performer nor try to update any plugins within three weeks of an upcoming show nor update anything else. That way, if a problem is discovered, there’s time to deal with it without stressing out.

I would add that this rule applies to any updates. Don’t update your operating system if you’re close to or on tour. We have seen numerous reports where Gig Performer stopped working and discovered that a recent anti-virus update blocked Gig Performer or an update to a firewall prevented a plugin from “calling home”, thereby disabling it.

Even installing a new product that (you would think) has nothing in common with Gig Performer could cause an issue if it replaces some shared libraries. Device driver updates for hardware don’t always work and if you have a controller that you use with Gig Performer, the last thing you need is for it to stop working just as you leave for your show.

Windows Update is famous for breaking stuff that worked fine before the update!

This is philosophical on my part, it has nothing to do with Gig Performer itself but rather about simply not wanting to have to deal with any problem when you’re about to go onstage and you know that what’s there now definitely works.

Related topics:
– Gig Performer licenses and activation policy
– Control all your update mechanisms on Windows
– Optimize Windows or macOS for your live performance