10 May Working with TouchOSC and Gig Performer [guest article]

In this guest blog article learn how our community member Thomas Lisi (@NanoMalefico) is working with TouchOSC and Gig Performer. 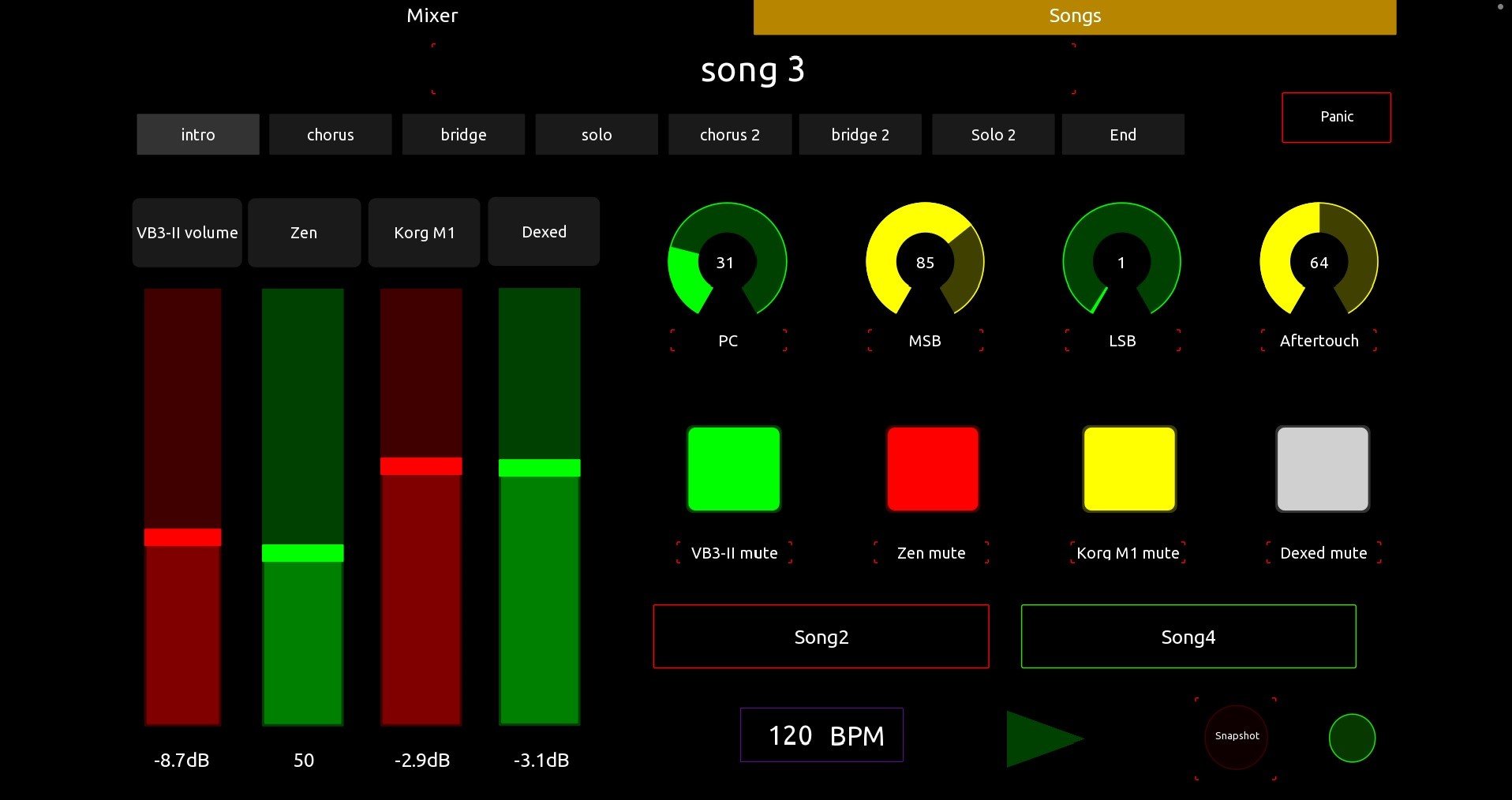 TouchOSC next generation, with the integration of scripts inside it, for me won the best place on the podium among the competitors. Now I can create some awesome templates with advanced functions for Gig Performer.

Inspired by David’s Lemur template I started my study to get the same functionality with TouchOSC. I also saw the great template for TouchOSC created by community member @rank13 and I said to myself – OK I want it, but I want to try to add an expandable and scrollable Songs List. So I continued to deepen the study.

The TouchOSC file and the gig file are attached at the end of this article and I will guide you through what you can do with them.

All unneeded controls will be hidden

.
This is one of some interesting features present in the David’s Lemur template. Take a look at the screenshots below: 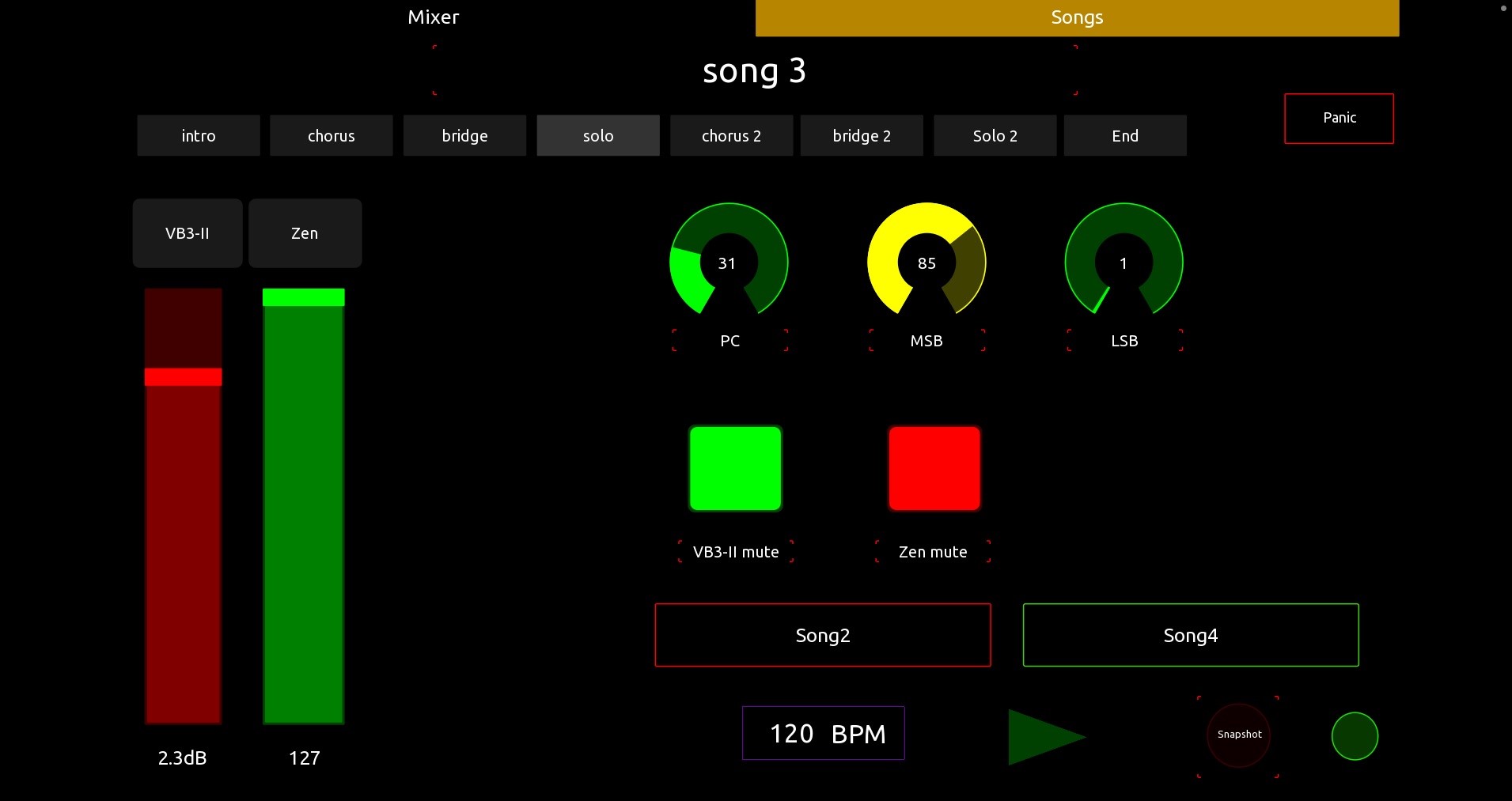 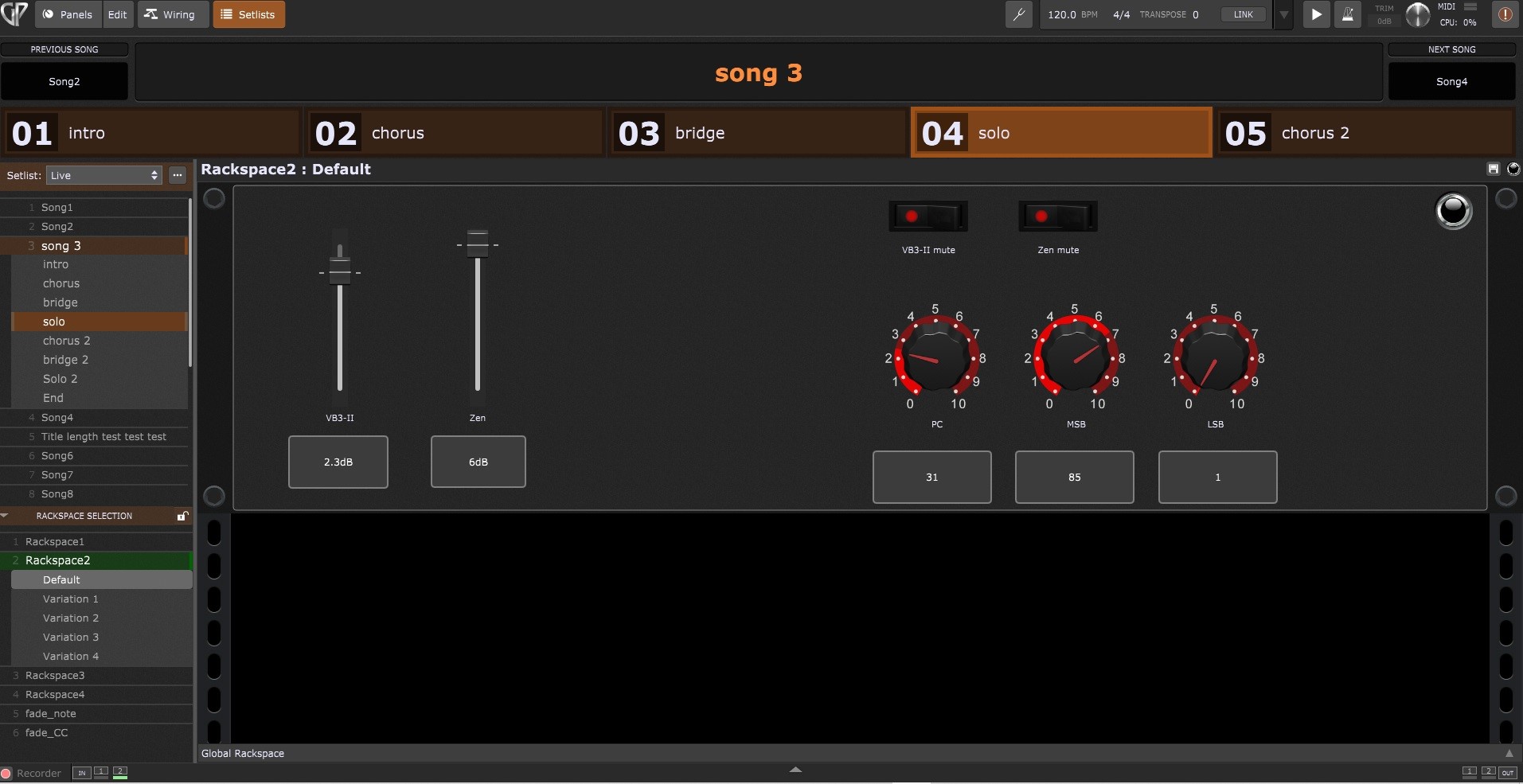 As you can see from the screenshots, this mechanism allows us to view only the controls assigned to the widgets that have OSC addresses. Other widgets do not show up.

The Show / Hide function will only be executed on controls that are assigned the ‘Tag‘ described below. So, all untagged controls like faders, knobs, labels will not be hidden.

Song and song parts in TouchOSC 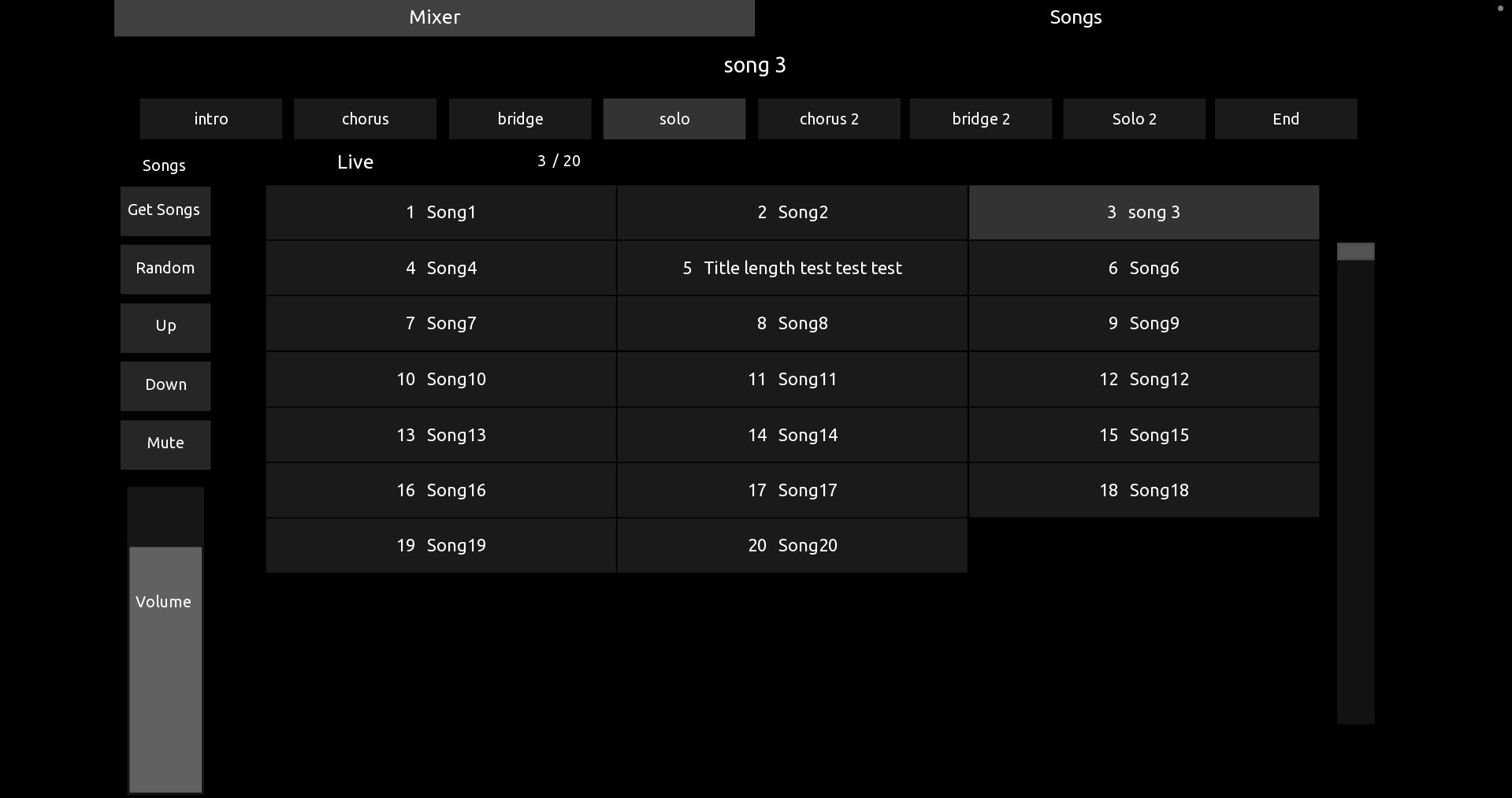 .
We can resize the grid containing the list of songs, and scroll it through the side fader: 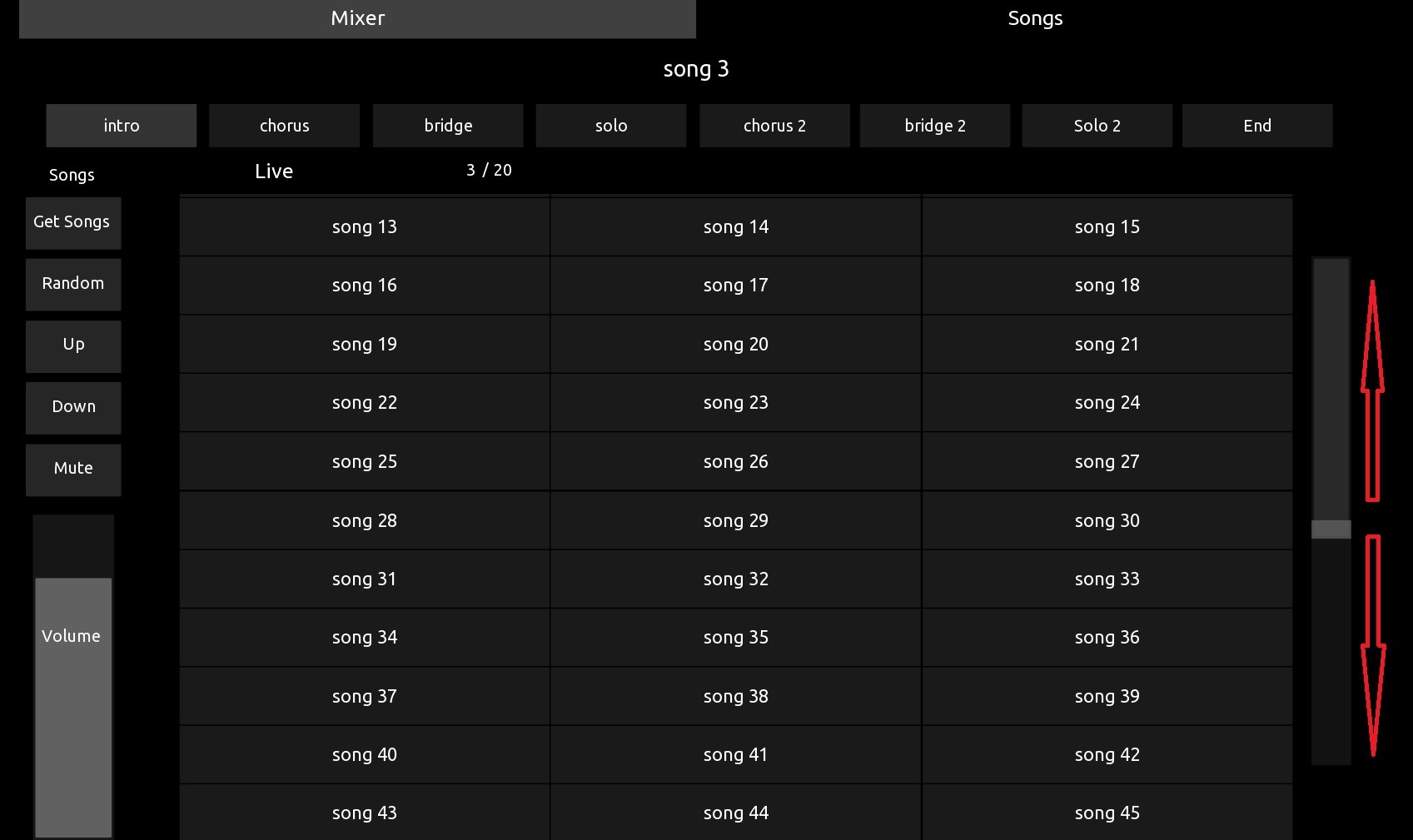 Change these parameters to resize the grid:
– Control → H (grid height)
– Grid → X (Columns) and Y (Rows) (X*Y = max number of songs that can be displayed, so be careful not to use too low values)

How to set and rename Tag, Controls, Widgets to TouchOSC and Gig Performer

.
This is how TouchOSC and Gig Performer are set:

When we add a control, the TAG is optional. We can use it to group different controls. Let’s take an example. We add a fader and name it Slider1, a label named Slider1Name and one named F_Val1Name. For all 3 objects we write F1 in the TAG box. Now for example we could use any function for all the controls associated with the F1 TAG without repeating it for each control. In our specific case we will use the TAG on the controls we want to use with the show / hide function.

* You can use the default caption or customize it
** In the Label widget, set the caption to Custom caption and rename it to [value]
– ‘n’ is an ID Number

This is what you can do without modifying the script

Note: if you move a control to another page or group it will be renamed. So you will need to rename it back to its old name.

.
The primary purpose of this article is to help users like me, who have little experience in programming, think it’s too difficult, but would like to try it anyway. Each line of code is commented to help understand how to use its functions and those of LUA.

Parent & Children – how and when to use them

We can think of parent as a container and children as its content. 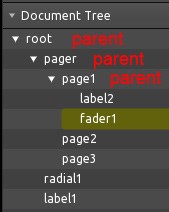 Referring to the image above we can see our current position highlighted. Now suppose we want to visualize the value of the fader1 on the label1 present in the root. We can do it by sending this value to the label1 by the ‘notify’ function. (the ‘notify’ function is explained further in the article). There are several ways to do this and we can see them in the image below (Script in fader 1):

Instead, if we want pass a value by radial1 to label2 we can do this as follows: 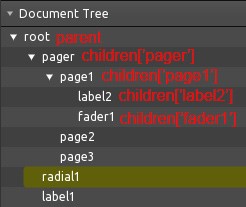 Here’s the script in radial 1:

.
Here are code screenshots (check out the comments, as well).

The script in the root

All about the tag 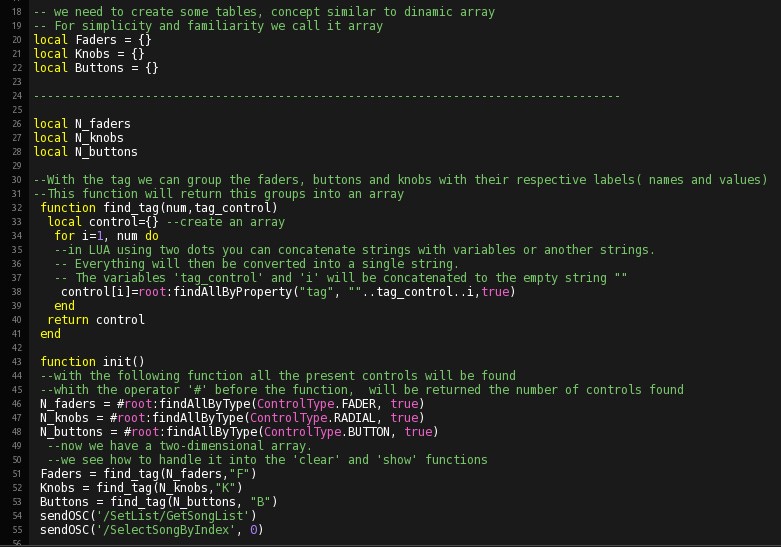 ‘Clear/show’ function in action after the callback function

Similar to the ‘show’ function, here we can only see the first part dedicated to Sliders. Obviously, the same procedure is repeated for Knobs and Buttons.

Get the songs and place them in the song list grid

Current song in the count number and highlighted label 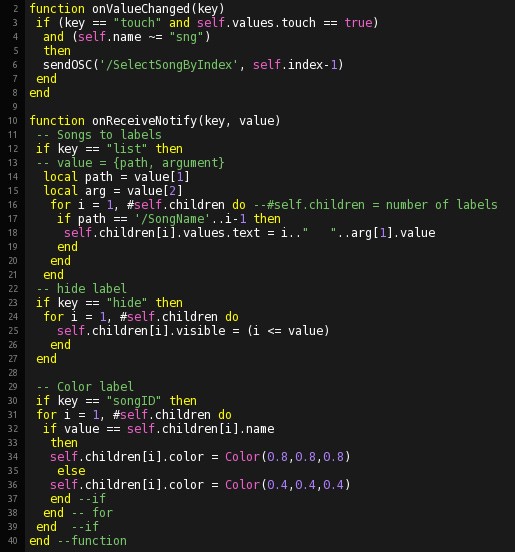 How I did the scrolling feature 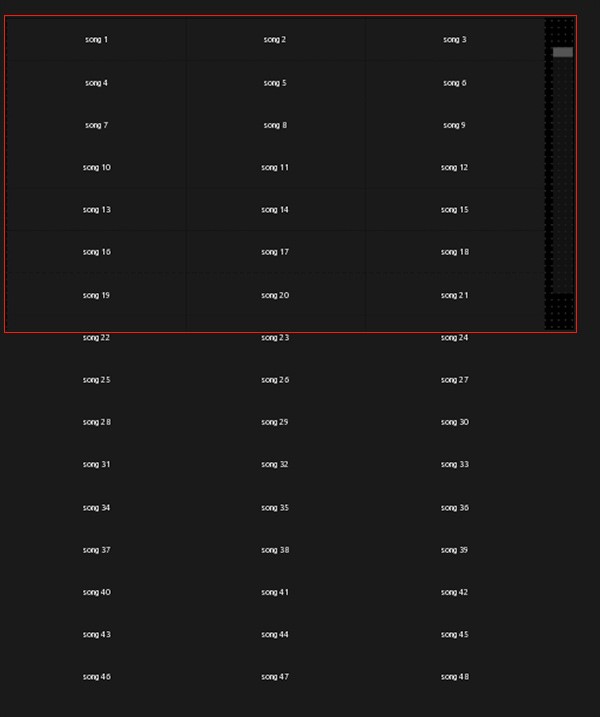 The script inside the scroll fader

.
After several tests everything seems to work as it should. I tested it from my Android phone and Windows PC program.

In the attachment, together with our template there is a gig file containing different situations (e.g. with GPScript) to test it thoroughly.

For more information about the LUA language, you can visit:

.
Written by Thomas Lisi (@NanoMalefico). If you have any questions, visit this community thread.