What are extensions in Gig Performer and how to use them

In this article you will learn what are extensions in Gig Performer and how to use them.

What are extensions and the SDK?

.
Extensions are basically libraries (.dll files on Windows and .dylib files on macOS) independently developed that Gig Performer can load so as to provide additional functionality, i.e., additional support for a hardware device, some new GUI functionality or even additional GPScript functions. For the first, an extension would make your hardware device usable directly from within Gig Performer as if it was already built-in.

Extensions are developed using Gig Performer’s SDK (software development kit) that is freely available under the GPL-3.0 license and can be downloaded from GitHub. Visit that link to learn more about SDK and fundamentals.

Important: Deskew Technologies LLC does not officially support third-party extensions and cannot be responsible for any impact they may have on Gig Performer itself. Please test your extensions thoroughly before using them in a live performance. Should you have issues with an extension, please contact the developer of that extension.

Are there any published extensions to try out?

.
Gig Performer power user @rank13 published three extensions on GitHub. They are very well documented with usage info, GIFs, etc. so you can easily check their functionality. We’ll briefly present them and provide the download links.

The Gig Performer Selector extension provides you with an additional resizable window for selecting rackspaces/variations or songs/parts: 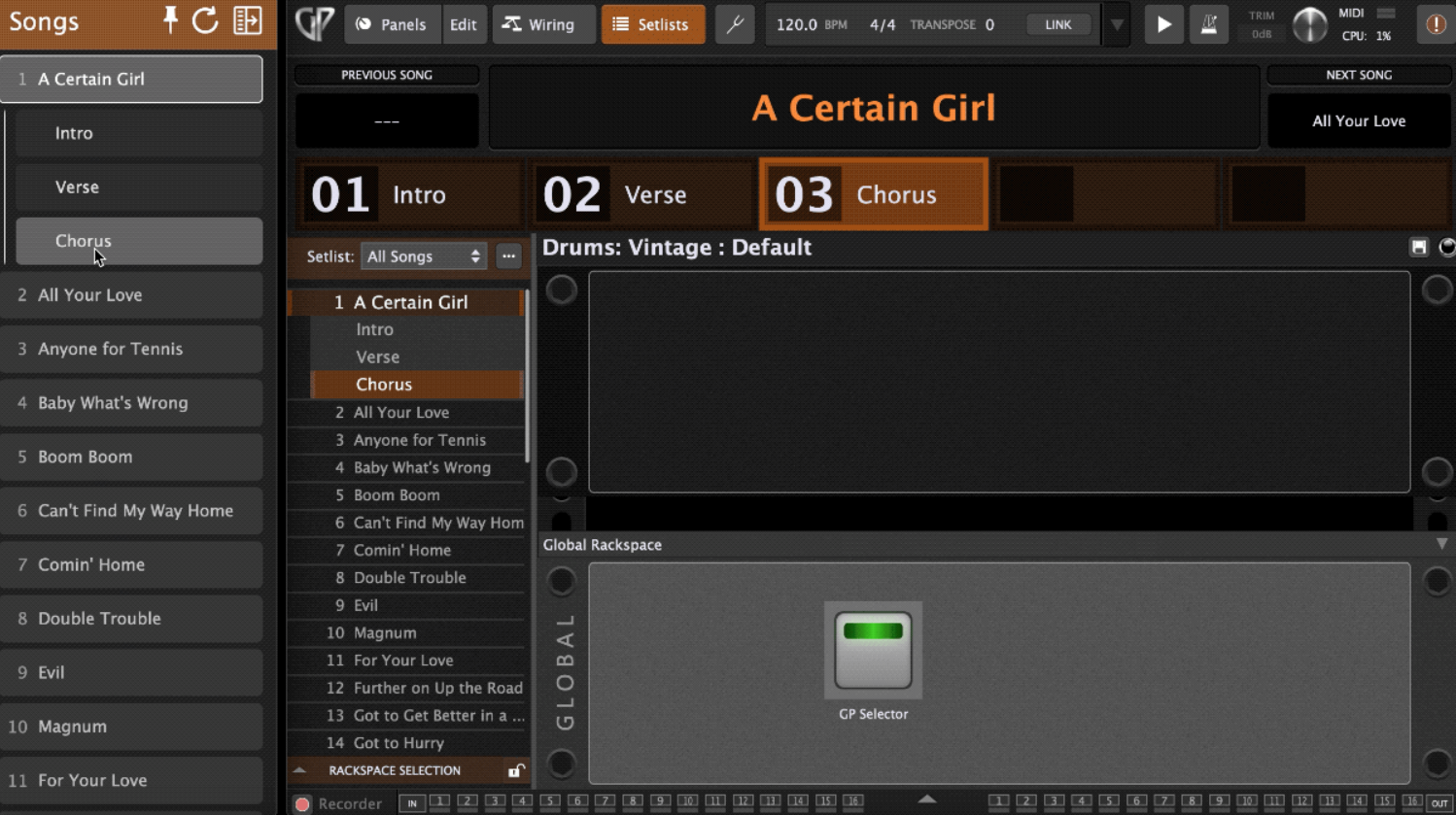 It has two display modes: a compact list of rackspaces/songs, or an expanded window with a large display of the current and previous/next rackspace or song. The visibility of the window can also be controlled via widgets (thereby allowing it to be triggered from an external MIDI controller). You can see Gig Performer Selector in action in this Community thread.

The Heads-Up Display (HUD) extension adds GPScript functions to show a heads-up display (HUD) window, as shown in the screenshot below:

A basic knowledge of Gig Performer’s scripting language (GPScript) is required to use this extension.

The Radio Button extension implements radio button widgets. Radio buttons are mutually exclusive, meaning you can only activate one widget at a time from a defined group of widgets.

The extension adds 4 panel templates for 2, 4, 8 or 16 radio buttons. These can be accessed from the New panel menu while in Edit mode of the Panels view in Gig Performer.

If you are interested in developing a Gig Performer extension, here are some small examples that will help you along the way:

.
How to install an extension in Gig Performer?

.
We already stated that an extension is a file (.dll file on Windows or .dylib file on macOS), so when you download an extension for your operating system, just simply move it to the Extensions folder:

Afterwards, restart Gig Performer and a prompt will appear asking to confirm whether to install the extension. Check out this user manual page for more information. Gig Performer extensions can easily be disabled or enabled again through the Options window.

If you suspect that an extension is preventing Gig Performer to start normally, you can temporarily disable extensions in the Temporary Startup Options dialog. Check this blog to learn more.

The relevant new community category is GP Extensions with two sub-categories: Using GP Extensions and Developing GP Extensions. If you have any questions or want to share your feedback, please visit this Community thread (I’ll also create there an index of extensions, available for Gig Performer).

.
Share this article it to support Gig Performer and spread the word!