For users coming to Gig Performer from other audio plugin hosts, there is some confusion as to how to configure Gig Performer so you can use the same set of Program Change (PC) or Control Change (CC) messages for different parts of a song, no matter what song you’re playing.

A very typical scenario is where you are using a MIDI pedal controller where the bottom 5 buttons (say) are configured to always send out PC 1 to 5 and a couple of other buttons are used to “Move Up”/“Move Down” to switch to another song, perhaps by sending program changes starting at PC 6 (for example) so that each time you press the “Move Up” button, the PC number will increment.

Alternatively, you may have a keyboard controller that allows you to directly enter a PC number so you can go immediately to any song.

So let’s see how one configures Gig Performer to behave this way. We assume that you are already familiar with Gig Performer 3’s implementation of Songs and Song parts. If you are not, you can read all about them in our user manual.

OK – let’s take a look at Gig Performer with a setlist loaded. The example here is real, used by this author with one of his bands. If you look down the left hand side where the songs are listed, you’ll see a number to the left of each song. That number is in fact the PC value that you need to send to Gig Performer to select the song. 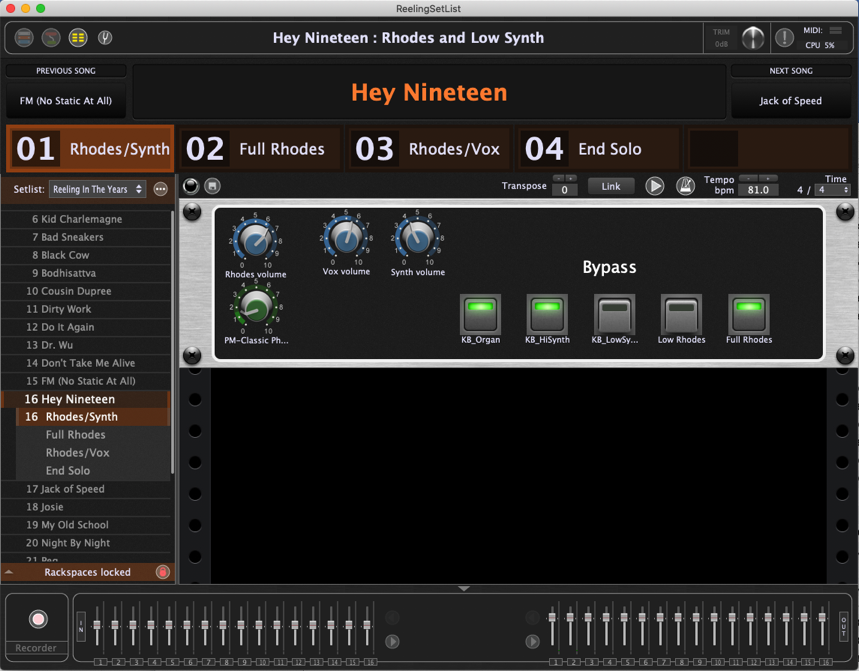 Now, notice the song called “Hey Nineteen”. You’ll see that the PC number for that song is 16. But wait a moment — there’s another line underneath (Rhodes/Synth) and it also has 16 to its left. What’s going on here? Let’s look at that part of the setlist more closely:

So when the song “Hey Nineteen” is selected, directly below is the list of song parts for the song and here’s the critical thing to understand.

Program change numbers are associated with song parts, not with songs themselves.

This is because a song always has at least one song part. You cannot have a song without any parts in it.

So when you send PC 16 what is really happening is that you’re selecting the song part “Rhodes/Synth” which is owned by the song, “Hey Nineteen”.

The parts of a song are also displayed in bigger fonts in little panels across the top of the Gig Performer window:

You can switch to a specific part by just clicking on one of those panels. However, let’s now look at the Setlist Options (Click the Options menu and then select Setlist): 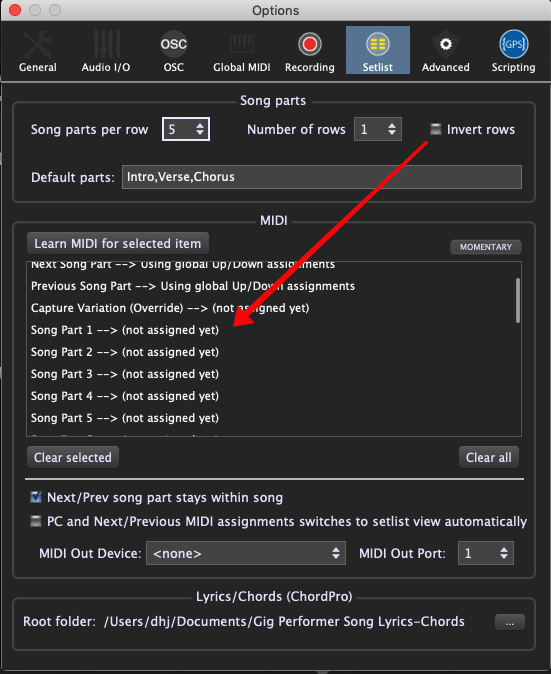 You can assign pretty much any unique MIDI event to each of those entries so that, when you generate the MIDI event, the associated song part will be selected and that will work for every song. You could assign some unused notes from a keyboard, or perhaps drum pads, some CC numbers (typically buttons on a controller) or PC numbers, or even a mixture. Just click the “Learn MIDI for selected item”, select one of the entries and send a MIDI event to it.

In the example below, I’ve assigned the bottom four notes (technically Note On events) of my 88-note keyboard controller to the first four song parts and am getting ready to assign the next note to the fifth part. By the way, although a song can have as many parts as you need, you can only assign MIDI events to the first 24 parts.

Here is another example, where I have assigned PC numbers 1 through 5 (coming from an Evolution U-Control) to the first five song parts. 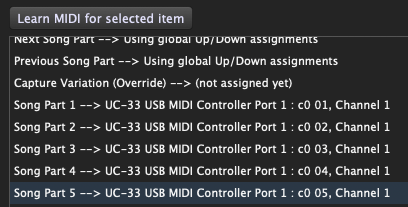 Once you have set up these assignments, you can use the same MIDI events to select the desired song parts, no matter what song is selected.

Related topics:
– How to change sounds and control plugins from your MIDI controller
– How to automate switching rackspace variations and song parts using the MIDI File Player
– Songs and Setlists
– Basic terminology in Gig Performer