Why we created Gig Performer

15 Sep Why we created Gig Performer

Posted at 18:11h in Gig Performer Blog by David Jameson

The short answer is we needed it ourselves! The long answer is, well, much longer, so read on.

Although I was using various MIDI sequencers and DAWs since the 80s, I only got back into live performance about nine years ago. As a Mac user I was naturally drawn to Apple MainStage, which, at the time, I felt was going to be just perfect for me. At the time, I was still doing the Rick Wakeman/Keith Emerson thing. You know, surrounding myself with about 9 keyboards including a Korg Oasys, a Prophet 8, a Moog Voyager, a twin-manual Hammond clone and various MIDI keyboard controllers.

However, I soon ran into some very bizarre problems with MainStage, the details of which are beyond the scope of this article but suffice it to say that I just couldn’t get things to work reliably the way I needed.

My next approach was to implement MainStage functionality using MaxMSP version 5 from Cycling74. I wrote a 3-part article about how I did this which you can read here. It was an ongoing project and it worked sufficiently well that I went on tour several times with that environment. Unfortunately, newer versions of Max were becoming much less reliable and I was forced to stick with MaxMSP version 5 even though newer versions had some really cool features, particularly editing related, that would have been really helpful. A bigger problem was that VST support in MaxMSP was becoming problematic and unreliable, at least for the ways in which I needed to use them.

Here’s a critical insight. I have a serious technical background in software development but when I am in “music mode”, I don’t WANT to have to care about techie stuff. It needs to just get out of my way. If you sit down at a piano or pick up a guitar and start playing, you don’t get distracted by the mechanics of the piano or guitar, you just play. You can focus on creativity.

So, along with my partner, an extremely strong software developer but also a touring guitarist, we decided it was time to create our own audio plugin host that would do exactly what we wanted. We are both touring musicians and so rather than just having an abstract understanding of the needs of performing musicians, we’ve both been (and still are) there. One important issue that never seems to be addressed by developers of plugin hosts who don’t actually perform is the rapid need to diagnose the origin of a problem when you’re on stage. If the sound in your monitors stops suddenly, you really want to know fast whether it’s your hardware, your software, or something wrong with monitoring or FOH.

Some key goals were

If you are a guitarist and you want to feed your guitar into a phaser and then into a reverb, it should be (and is) as simple as building this: 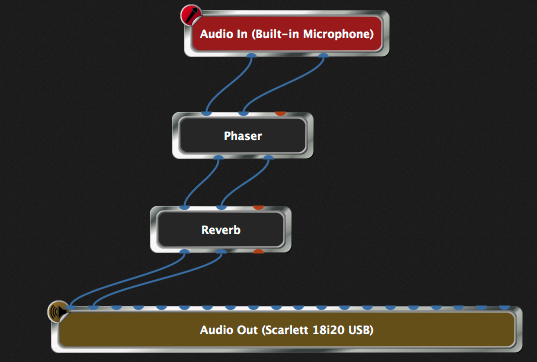 If you want to route your guitar to your phaser and to your reverb at the same time, then just change your connections to look like this. 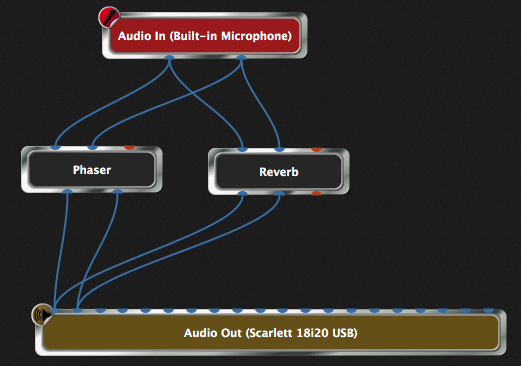 In either approach you can then easily create a front panel to control the amount of reverb and phaser or turn them on or off and then control them from a pedal board. Yes, we have knobs that go to 11!

The plugin routing and panel displays shown here are examples of what might be in a single rackspace in Gig Performer. You can have many rackspaces, each of which can have a completely different set of plugins and front panel designs. You can switch from one to another, even in the middle of a beat with no glitching.

One question we are asked from time to time is why we don’t include any plugins such as synths, effects, samplers, midi processors and so forth in Gig Performer. In fact this was a very deliberate decision on our part and we have three main reasons.

For all of the above reasons, we chose to focus on overall functionality, plugin management, reliability and features that a live performer will need to leverage whatever plugins they want to use.

There are various documents and videos on our support page (http://gigperformer.com/support.html) which we encourage you to review, even though it’s not particularly hard to figure out Gig Performer without a manual. The reason to look at these documents is so that you can very quickly get a sense of the capabilities of the program as you’re getting started. Beyond the basic functionality which addresses the needs of the majority of performing and session musicians, Gig Performer also has some very advanced features such as a full OSC implementation for both remote control and for interaction with other applications such as Ableton Live. It also has a built-in super-fast programming language, GP Script, if you just need to tweak things.

Our community forums are where you will be able to interact with other users, find out about interesting techniques and maybe, just hang out.

Gig Performer™ runs on both Windows and Mac platforms. If you are a guitarist, keyboard player, bass player, vocalist, drummer, or a FOH live sound engineer, I encourage you to check out Gig Performer through our 14-day fully functional free trial. The product is well supported through our knowledge base, forums and there are even real live people you can call in the unlikely event that you have a problem.

Gig Performer is also available in various versions (including a subscription) through the Plugin Alliance.

Keyboards and Eigenharp: The Security Project, Beyond The Wall, Reelin’ In The Years