Gig Performer is not a plugin chainer

09 Feb Gig Performer is not a plugin chainer

Posted at 21:15h in Gig Performer Blog by David Jameson

As the great writer Alex Hailey once said, “Mistrust the obvious”.

Sure, there are ways to connect plugins together, such as using a traditional channel strip model, via a matrix or visually, the last being the way that Gig Performer does it.

That’s the easy part – and even easier if you use Gig Performer to do that routing. For an example of why it’s easier, see a quick example at Gig Performer Way vs. The Channel Strip Way

But it’s what you can do after you have connected your plugins together that makes the difference.

Gig Performer is part of your instrument, not your DAW

The philosophy behind Gig Performer is that you create the sounds you need to be able to perform entire songs. The sounds are not just a function of how plugins are routed together in a rackspace (see below) but also how they are controlled in real-time as you play using widgets to affect plugin parameters and using your physical devices (keyboards, MIDI guitar pedals, control surfaces, etc) to not only modify the sounds in a rackspace but also to switch from one set of plugins to a completely different set of plugins on the fly. When you have created the sounds you need, along with the real-time performance aspects, you can record your performance with your DAW and, without any changes, take Gig Performer on stage and produce identical results.

In the Gig Performer world, looking at the image below, each rackspace on the left represents a complete collection of interconnected plugins, i.e, a plugin topology. You can have as many rackspaces as you need for your show and more importantly, you can switch from one rackspace to another, even right in the middle of a bar, while playing a chord on a keyboard or with your guitar, and have the sound change instantly without any glitching. Individual rackspaces encapsulate other functionality such as tempo, global sync, controlling audio tail length when you switch, program change configuration and so on.

Gig Performer uses visual routing instead of traditional channel strips. Each rackspace (the column on the left) represents an entirely separate collection of connected plugins. You use these to create your songs and song parts for instant use in a live show or session with instant access. 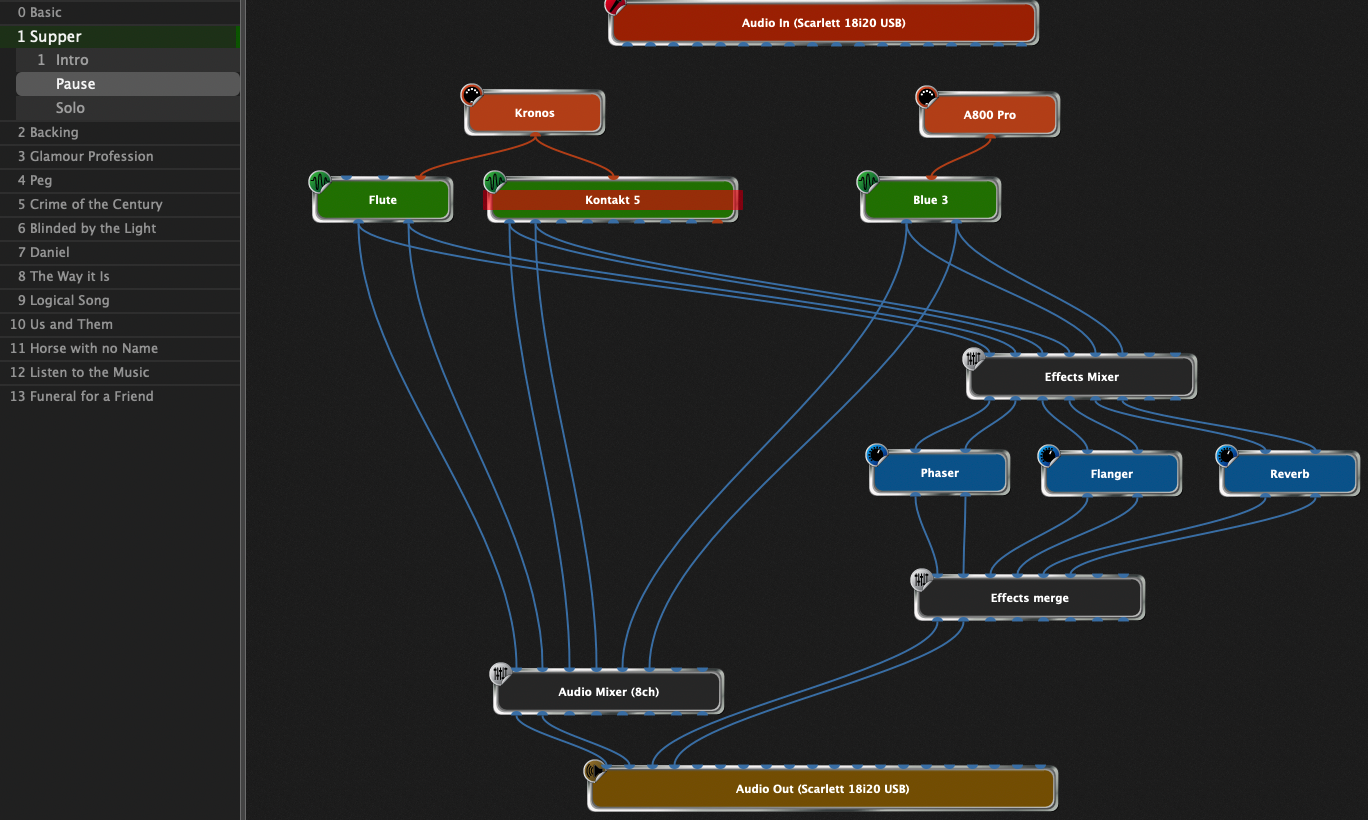 On the panel side, each rackspace has its own collection of widgets (knobs, buttons, sliders, expression pedals, etc) which are used to control various plugin parameters, either onscreen using a mouse (or finger if you have a touch surface) or, more usually, by using physical controls on your keyboards or pedal boards. You can lay these out any way that makes sense for your particular situation. Using Gig Performer’s OSC support, you can also view and control widgets using an app like Lemur or TouchOSC

The image below shows Gig Performer in Song mode. Among many features of this mode, you can easily use it with a MIDI pedal controller where you can directly switch among different parts of a song (with instant audio switching of course) during the performance. With snapshots, you can reuse rackspaces but still override settings as needed. Switching song parts lets you send MIDI events out to external devices on the fly.

Here are a few other features: 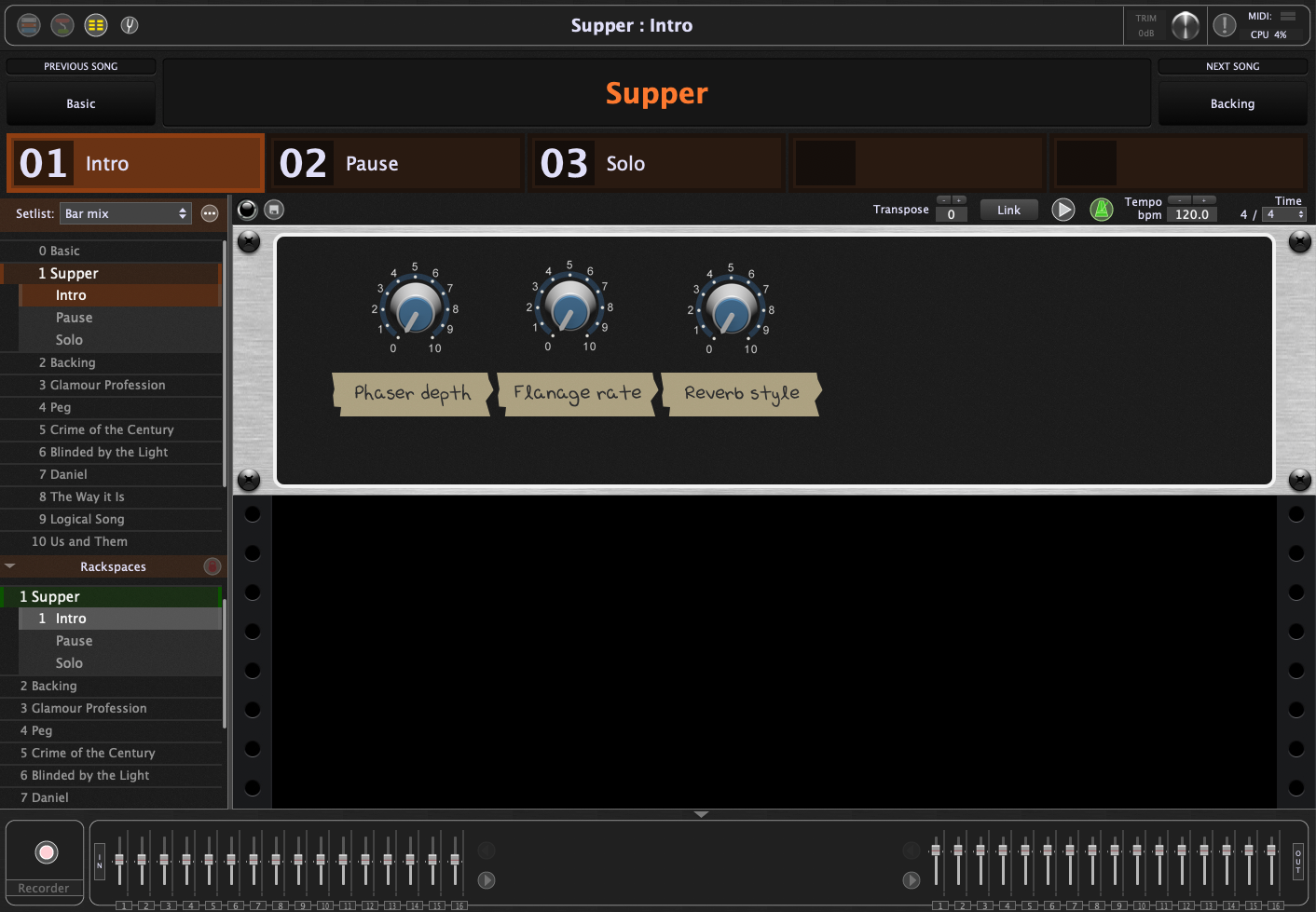 Gig Performer® and Own The Stage® are registered trademarks of Deskew Technologies, LLC