What are Temporary Startup Options in Gig Performer

06 Aug What are Temporary Startup Options in Gig Performer

The Temporary Startup Options dialog is a new feature in Gig Performer 4 that allows you to change certain settings when you first open Gig Performer: 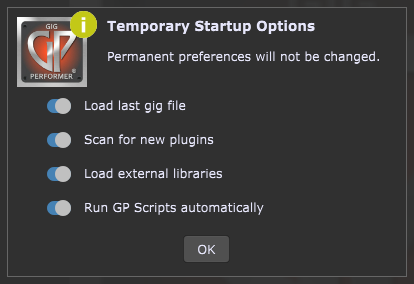 Changes in this dialog will not be permanent, i.e. when you start Gig Performer again, all changes will be reverted to your existing preferences.

There are four settings that can be changes in the Temporary Startup Options dialog: Load last gig file, Scan for new plugins, Load external libraries, and Run GP Scripts automatically.

.
By default, Gig Performer loads the last gig file with which you were working and there is a setting in General Options that controls this behavior (Reload the last gig on startup).

If you leave the default setting turned on, you occasionally might want to temporarily prevent automatic gig file loading due to several reasons:

On the other hand, if you leave the default setting turned on, rare situations may happen that the Gig Performer’s plugin scanner is stuck on startup, while scanning problematic plugins: 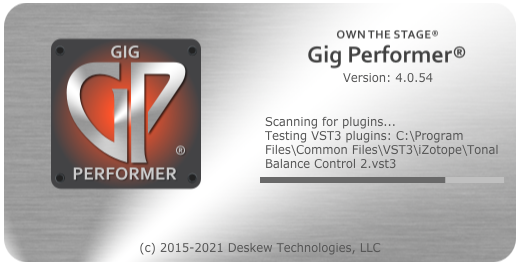 Note: even if you temporarily turn off this setting and run Gig Performer, you can still open the Plugin Manager and scan for new plugins from there.

.
One of the new features in Gig Performer 4 is an external API for controlling Gig Performer with 3rd party hardware. That means that hardware manufacturers can develop extensions for their products and seamlessly integrate them with Gig Performer. Extensions are basically libraries (.dll files on Windows and .lib files on MacOS) that Gig Performer can load and provide the additional support for a hardware device (learn more here): 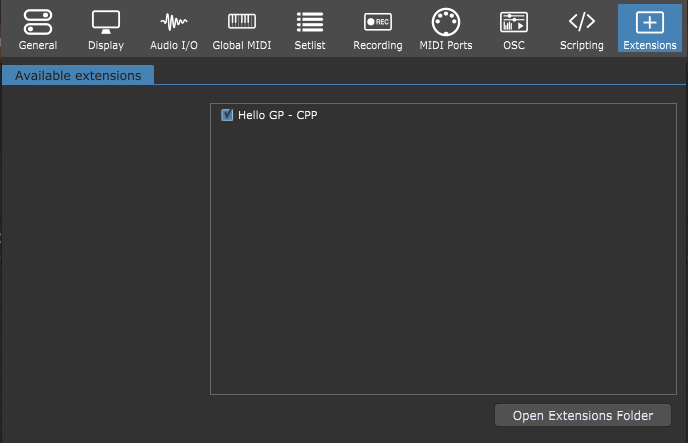 If you suspect that an extension is causing issues with Gig Performer, simply turn off the Load external libraries toggle button in the Temporary Startup Options dialog and then disable the desired extensions (click here to learn more).

At this point there are no official third-party extensions available.

.
Another useful feature for troubleshooting issues for users who use GPScript in their gig files. By default, Gig Performer scripts are automatically run on startup. If you disable scripting on startup, you will need to explicitly recompile each rackspace script or restart Gig Performer to resume scripting support:

Own the Stage® with Gig Performer® !