A plugin crashed Gig Performer – how to find out which one

In this article I’ll present you a new feature that was introduced in Gig Performer v3.80, which allows you to find out which plugin crashed Gig Performer.

A plugin may crash any audio plugin host and there can be many reasons why, e.g.:

Whatever is the case, you can use a few simple steps to identify which plugin is causing problems with Gig Performer. To demonstrate these steps, I’ll use the same setup as in this article, where I discussed top websites for free audio plugins and how to use them in Gig Performer.

Before we start, please note that when Gig Performer starts, by default it will automatically load the most recently used gig file: 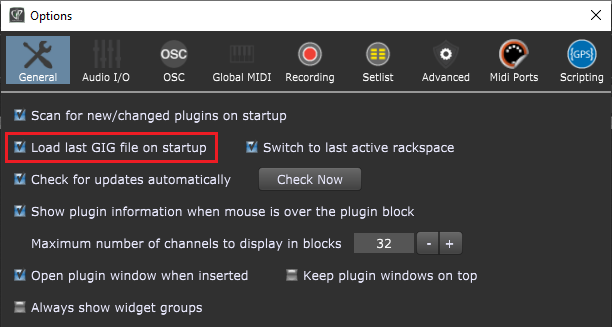 Click on the Options menu and select Preferences… if you want to review this setting. This means that if you have issues with one or more plugins which cause Gig Performer to crash – Gig Performer may crash every time it starts.

Luckily, there is a special keyboard shortcut that can help you to troubleshoot these issues. The procedure differs slightly between Gig Performer 3 and Gig Performer 4.

If the automatic load option is enabled (as shown in the screenshot above) – simply hold down the SHIFT key while starting Gig Performer 3. Keep it down until Gig Performer itself has finished loading and it will not load your last gig (see other tips and tricks here). This will bypass that default option so that you can quickly start Gig Performer 3 without loading the last gig file.

How to troubleshoot the issue?

2. In the second step, disable the plugin that you suspect is crashing Gig Performer:

You could always disable a plugin this way to reduce clutter in your plugin list, but a disabled plugin would still load in versions prior to v3.80. Starting with Gig Performer v3.80, when you disable a plugin in the Plugin Manager, it will not be loaded when you open your gig file.

Please note that the OrilRiver plugin is selected for demonstration purposes only and that it works perfectly with Gig Performer.

3. Reload your gig file and observe whether the problem still occurs:

4. If Gig Performer starts normally, you have found the culprit: 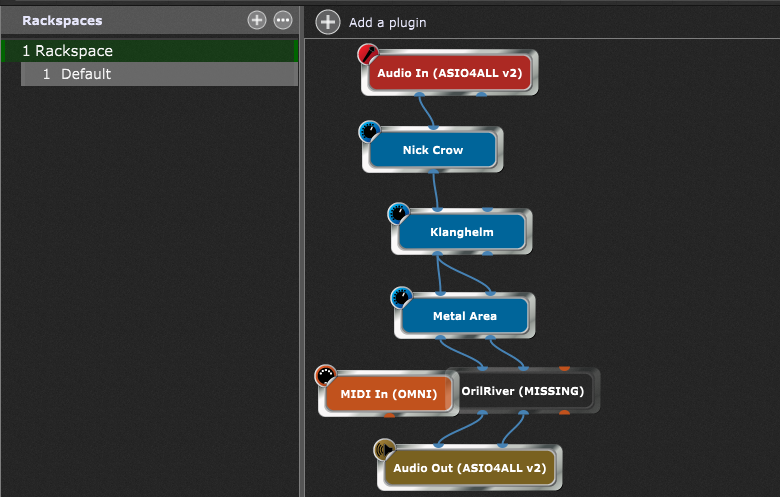 Let’s examine the screenshot above a bit. You can see a block named OrilRiver plugin, which is transparent and which reports that it’s MISSING (I have dragged the Midi In OMNI block to overlap with the OrilRiver block to demonstrate the transparency effect).

This is a special block in Gig Performer called Chameleon. This block imitates the real plugin we have previously disabled – it has the same number of input and output ports, and keeps the state of the real plugin. That way Gig Performer has all necessary data when issues with the problematic plugin are solved.

This feature is also extremely useful if someone sends you their own gig file which includes a reverb plugin (say) that you don’t have currently installed. You simply open that gig file and see which plugin is missing. Afterwards, you can either install the missing plugin or replace it with your own reverb plugin – right click on the chameleon block, then select Replace plugin and choose the existing alternative reverb plugin on your machine.

Once you have identified the culprit, what can you do?

1. Check to see if you are using the latest version of the plugin. Or if your plugin started crashing after your upgrade, see if you can try an older version.

2. Check if all services or components required for the plugin are running (for example: RCMService).

4. Contact the plugin’s support page and report the issue. Bugs in certain plugins are also noticed during Gig Performer’s development, and reported to their developers, so that the problem can quickly be resolved. Hopefully, the updated version of the plugin that fixes the issue will soon be available.

5. Search Gig Performer’s Community to see if there are similar problems with the specific plugin and/or create a new thread to report a problem.

Own the Stage® and enjoy Gig Performer®!

Further reading:
Installed plugin does not show up in Gig Performer
After updating Gig Performer, some of my plugins were not found