The hidden power of the MIDI In Block

03 May The hidden power of the MIDI In Block

Gig Performer’s MIDI In block is not just your everyday block for receiving MIDI events. It can do much more than just receive MIDI messages from an external MIDI device and feed them to connected soft-synth plugins.

It has important other functionality that often relieves you from having to use multiple separate MIDI processing plugins.

First of all, let’s just look at the plugin editor for a MIDI In block in Gig Performer 3. As you can see, the functions are broken up into different sections. 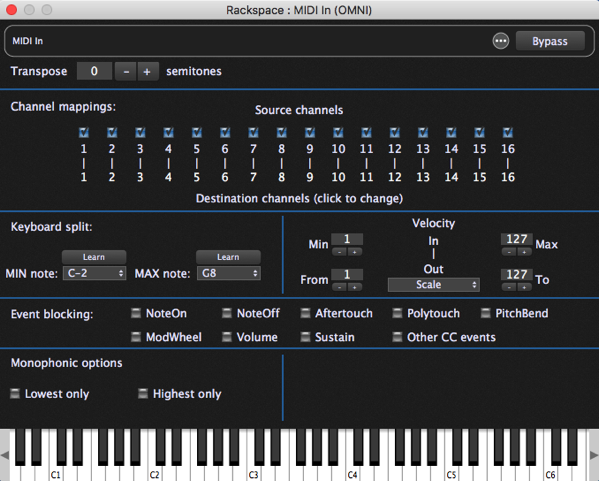 Let’s now examine each section, going from top to bottom.

You can remap incoming events on one channel to another channel or block certain channels.

You can create a keyboard split by selecting the lowest through highest keys that are allowed to pass through.

Tip: if you want multiple keyboard splits (including the ability to do partial layering), simply create multiple MIDI In Blocks and configure each of them to the desired range.

In this example, we have three MIDI In blocks, each connected to a different plugin. The split ranges and transpose values are configured individually in each MIDI In block and the blocks themselves have been renamed to display the actual splits and transpose values. Note that there is a deliberate overlap for the Blue3 (hammond organ) and Violin where one octave (C4-C5) is applied to both.

See also this forum article for the way to split your keyboard to control sounds that are on different MIDI channels of the same plugin.

You can restrict the range of note velocities that are allowed through. For example, you might allow only softly played notes to go through while loud notes are blocked. This is extremely useful if you want to have two instruments on the same range but only have one of them sound, depending on whether you play notes softly or loudly. The trick (much like with layering) is to use multiple MIDI In Blocks, each one configured to a different velocity range.

Velocity scaling (currently only linear) lets you remap incoming velocities to either expand or (more typically) compress the outgoing velocity values. However, it’s also extremely useful when you are restricting the velocity range. For example, even though you might have configured one sound to only play if you hit notes hard, you probably don’t want the sound to be only played loud. So for example, if you set the Min and Max values to 80 and 127 respectively and then you set the scaling From 1 To 60 respectively, your loudly “played” notes will be heard more softly.

You can block certain events from being passed through. For example, if you are laying two sounds using multiple MIDI In Blocks that receive MIDI from the same physical device, you may want your ModWheel or PitchWheel (say) only apply to one of the sounds. Or you might want to be able to adjust the volume of your lead sound without impacting the volume of your pad sound. Of course, you can also do this kind of thing by using widgets in a rackspace but sometimes it’s just convenient to send MIDI CC events directly into a plugin and so this blocking mechanism gives you finer control

You can arrange for only the lowest or highest note of a chord to be sent out. Combined with layering, this allows you to play chords but have the top (or bottom) note of your chord play a lead sound.

We have great plans for the remaining empty space on the bottom right of the MIDI In block plugin editor. Check Gig Performer 4 documentation for more information.

. Gig Performer also has a MIDI Filter plugin that can be used to either block events or to remap them to various other events. More on this in an upcoming article.

. If you’re still not satisfied, there’s always our proprietary language, GPScript, which allows you to perform arbitrary processing of incoming MIDI events, not only for more sophisticated splitting, layering and filtering, but you can also “send” MIDI events into the future, allowing you to create such effects as MIDI delay, arpeggiation and to use MIDI events to trigger other behavior inside Gig Performer itself.

. We would be remiss to point out that pretty much every function described above can be controlled using host automation. By using rackspace variations or switching song parts, you can instantly change your velocity scaling, modify the split range, turn on or off blocking and so forth. The possibilities are endless.

Enjoy and Own the Stage® with Gig Performer®.