What Brainspawn Forte Users Should Know About Gig Performer

02 Apr What Brainspawn Forte Users Should Know About Gig Performer

.
Shortly after the turn of the current century, I started to experiment with Virtual Studio Technology, and was very impressed with various software emulations of organs and synthesizers, and sampled pianos. I started to explore the possibility of replacing my hardware keyboard rig, with 2 controllers and a CPU built to run VST instruments. This idea took me on a journey through hardware computer builds, and VST hosts, to being a long time Brainspawn Forte user.  I’ve been using Forte as a VST host application to perform with VSTIs, live on stage, since Forte Version 4 was released.  Before discovering Forte, I was using Propellerhead Reason with some success.

The creator of Forte has recently announced that he is stopping all development and support of his products. In the wake of this announcement, I decided to explore the newest VST host software applications available, and landed on the latest version of Gig Performer, and audio plugin host for live performance.  I was instantly impressed, and saw many advantages I could gain from transitioning my keyboard rig over to Gig Performer.

A Gig Performer feature called Predictive Loading can be turned on if necessary to reduce RAM usage.  Predictive loading will cause GP to load only the next few Rackspaces, in the background, ahead of the current Rackspace in use. This means that you can use memory intensive plugins, like Kontakt, in many of your Rackspaces, and not worry about using up your system’s memory.

.
In Forte, as the Rack is developed, and plugins are added, the file can become very large, and have many instrument modules on the Rack View screen, where each plugins’ routing and configuration takes place.  Having all the plugins on one screen can get confusing, and cause a lot of paging up and down. Gig Performer’s Wiring View screen gives a graphical layout of the plugins, and the signal flow of MIDI and audio, for each Rackspace. This screen is where plugins and MIDI In and MIDI Out blocks are added, MIDI filtered and routed, and audio outputs routed. Double clicking a plugin’s block will open its editor window.

Forte’s Rack Editor page, where song sets are created using the Scene Pool and Song Pool, doesn’t exist in Gig Performer. Setlists are created in Gig Performer by simply reordering the list of Rackspaces shown in the left hand column, on the Panel View screen of a Gig file. Each Gig file can easily become a set list for a show, by Importing individual Rackspaces from disk. Forte users who use the same scene twice in the same song will want to explore Gig Performer’s Rackspace Variations feature. 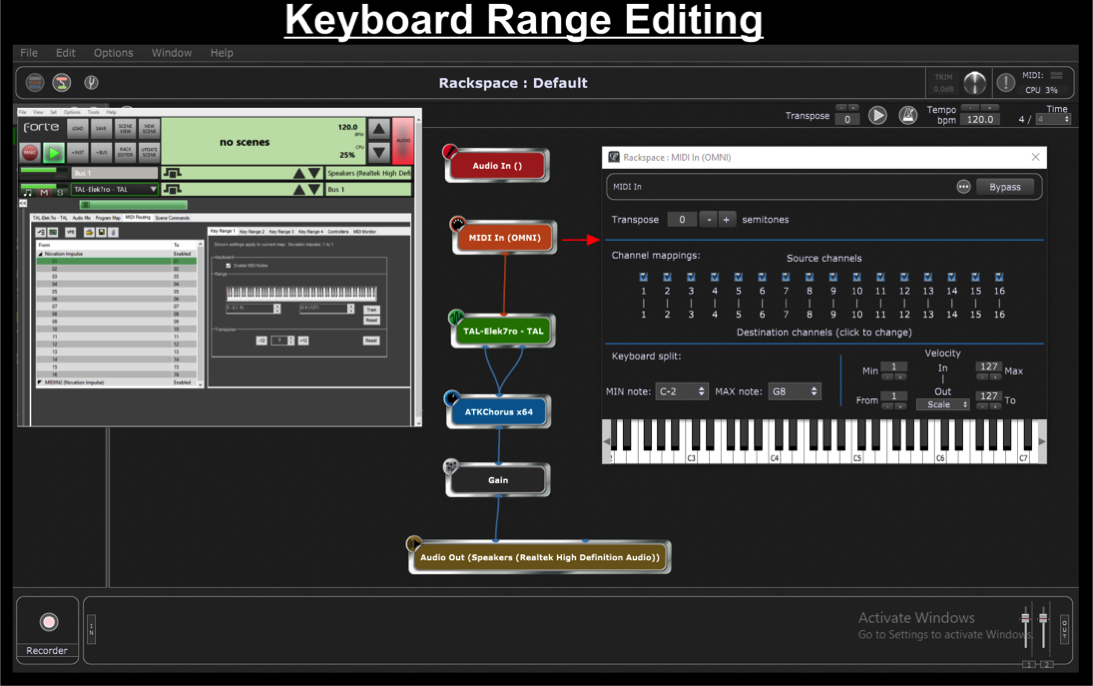 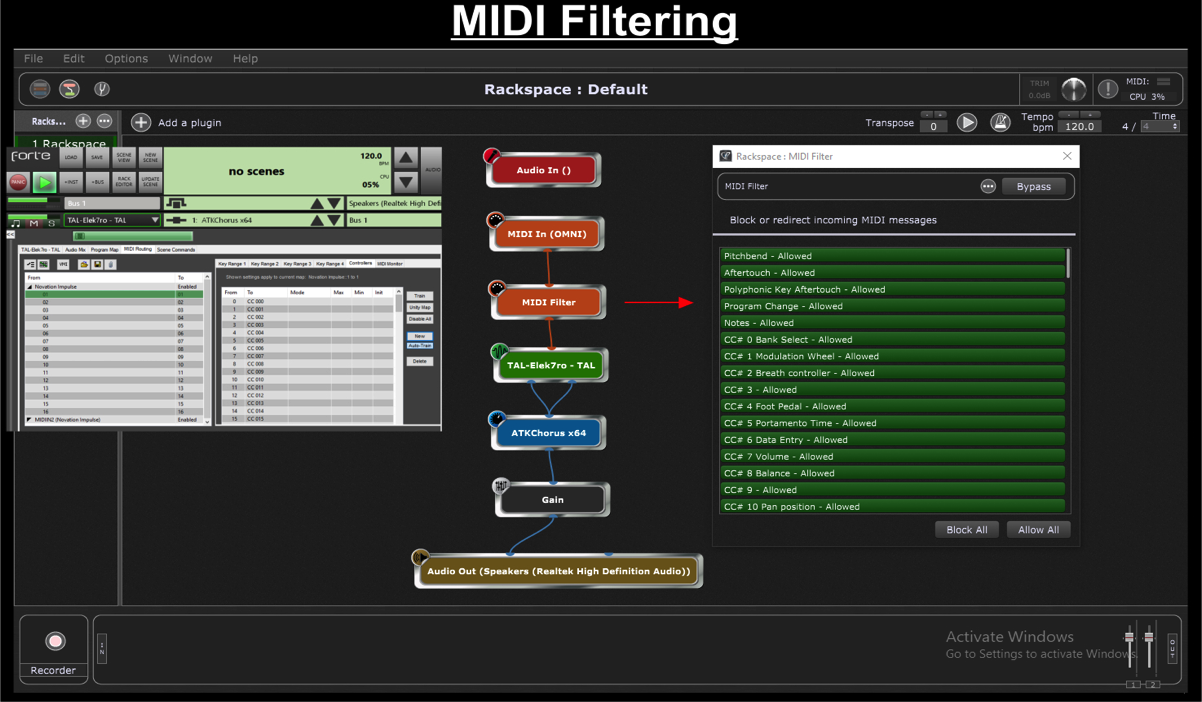 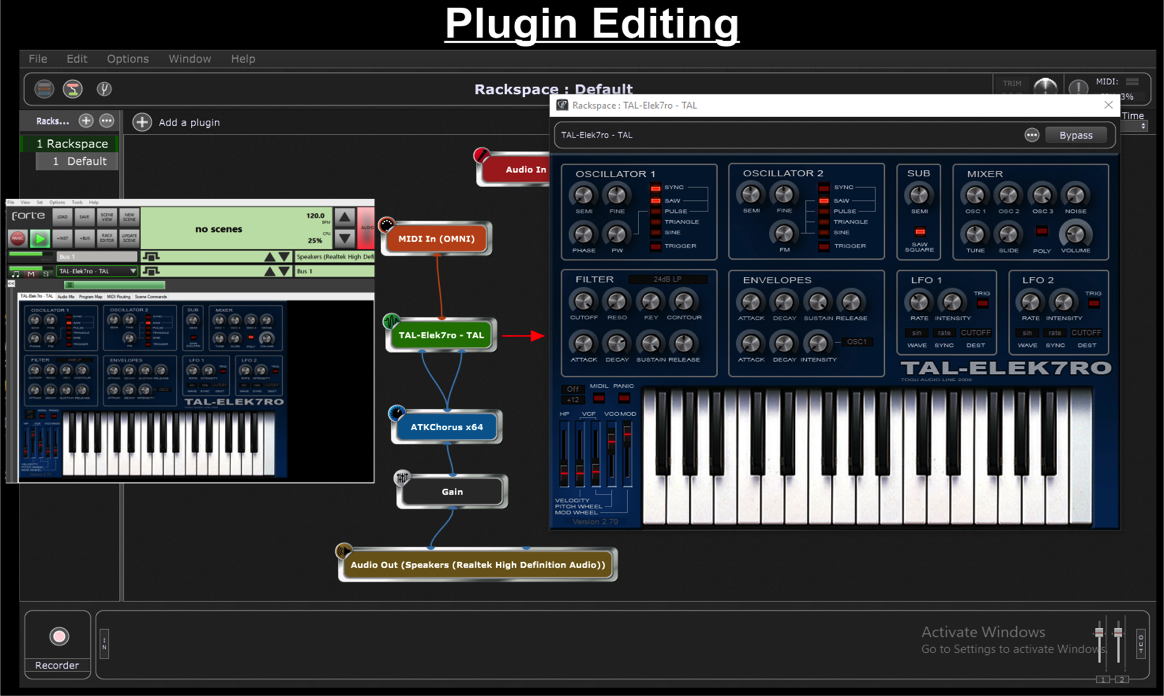 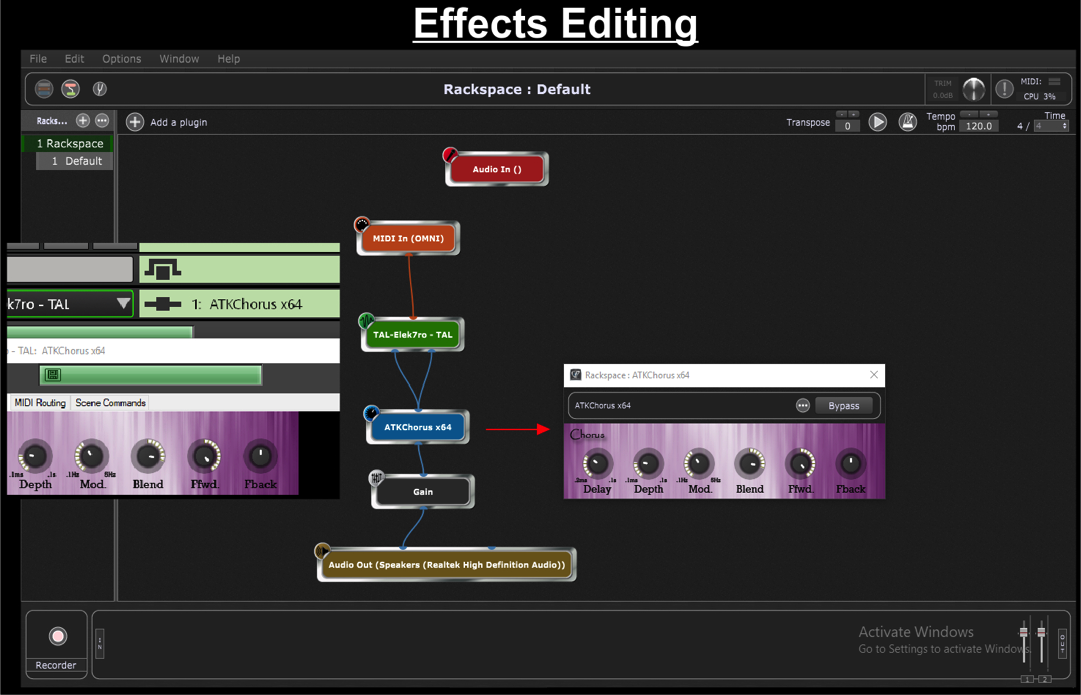 .
When setting up folders that will contain your VST (*.dll) files on your computer, you may want to keep the tree structure as simple as possible. Gig Performer’s Gig files contain plugin path information, as well as the plugin file names, within the Rackspace code.  Therefore, when configuring a “hot backup” computer, in order to transparently share and use Gig files from your main computer, each system’s VST plugin folder names and paths need to be identical.

If you want to still use your favorite 32-bit plugins, it’s still possible with the help of jBridge. While Forte could be set to automatically use jBridge during the plugin scan, Gig Performer does not have that option built-in. You will have to manually create bridged versions of your plugins with jBridge. It’s very easy, and step by step instructions are available on the jBridge website. Then just add the folder that contains your bridged plugins to the “folders to scan” list in the Plugin manager.

Some Advantages of Gig Performer over Forte

.
New and exciting features are sure to be developed for future releases of Gig Performer. Forte’s last, and final version was released February 9, 2018.

Related topics:
–  Some research on latency, jitter and buffer size (Gig Performer vs Forte)
– Gig Performer is the best companion for all your musical efforts and more
– Modern audio plugin hosts comparison
– Gig Performer is used by professional and well-known musicians all over the world